Processing astronomy pictures has always stressed computer systems.  (Newer DSLR cameras, like my Nikon D610 with 24.3 megapixel images or my D810 with 36 MP (and now D850 with 45.7 megapixels), also create large files that are difficult for even fast computers to handle in bulk.)  New image processing techniques, such as drizzle and deconvolution algorithms, are extremely computer-intensive.  (More on the equipment used to capture the images is here.)

It turns out I've acquired and use quite a number of astronomy and image processing titles.  The following work OK with Windows 7, 64bit:

This laptop replaces my old Dell Dell Inspiron N7010, which was not able to process my all-night DSLR time-lapse images effectively...  Working with those files in Bridge or Nikon ViewNX 2 was an exercise in frustration.

Desktop: My old desktop system vintage mid 2011: At that time I was toying with the idea of upgrading my computer system, then Fry's sealed the deal by putting the motherboard and processor I wanted on sale!  I'm using the fastest Intel Sandy Bridge processor chip.  These new chips bring top of the line processing power to a cool running and affordable CPU, reducing the cost for Intel's top performance by many hundreds of dollars, and reducing the power use (and heat generated) by your computer.  It also has a very decent display processor as part of the chip, which performs much better than the dedicated graphics card in my previous (which was a 4 year old) system.  This means a cooler, quieter case because I (didn't use to) need a graphics card...  But that changed when I went to a Dell U3011 30" monitor with 2560x1600 pixels, and I acquired an AMD Radeon HD 5700 Series display adapter.  That card caused all sorts of wierd problems resolved by the GTX960 upgrade.  Here are the specs for the major components of the new system:

Here are some overclocking references on the setup as I sort everything out.  It looks like people are hitting 5.0 GHz with some frequency and 4.5 GHz range just about always with a setup like mine.  As noted above, as of 7/15/11 I'm running at 4.43 Ghz:  As of 9/14, this processor is still near the top of it's class in speed as compared with other intel processors.

Scroll down for for pictures of the desktop.  The massive Noctua CPU cooler assembly was the last major component to go in, and after that it was time to hide the wires.. 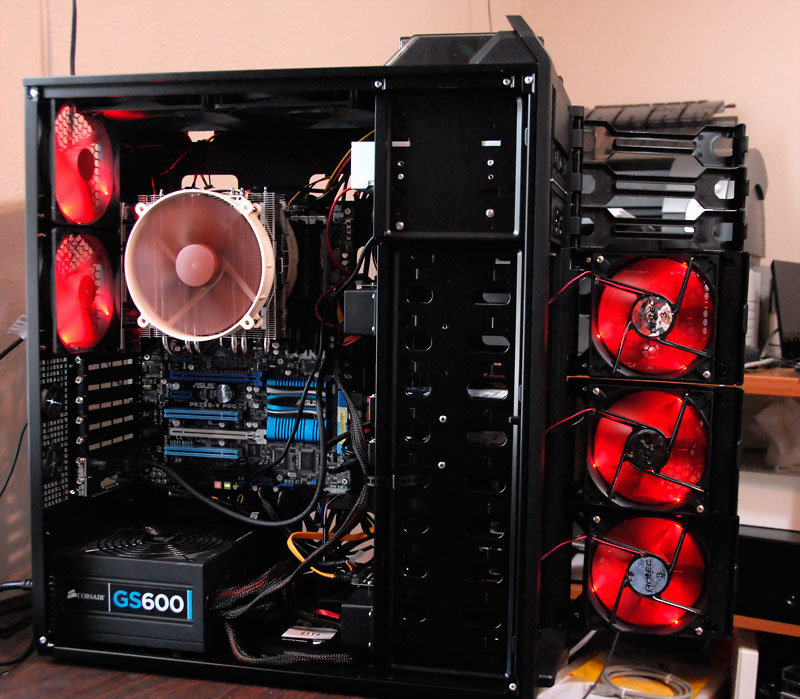 The front fan doors are open in this shot.  There are 7 large (120mm) fans that come with the DF85 frame (2 on top you can't see).  Plus the CPU has two monster (140mm) fans.  The big fans move a lot of air.  I run the case fans on low, and the CPU fans on the medium setting, making for a surprisingly quiet package providing enough cooling for 4.4 GHZ overclocking stress tests.  As for the case style, it does look like something an 18 year old might choose, and I'm not sure an interior decorator would put this color combination together.  The case was the best Fry's had in the store the day I was putting the system together, so fate pretty much determined it.  I'm more of a function over form guy, but I may decide to get an LED side case fan to maybe balance everything out ;-) 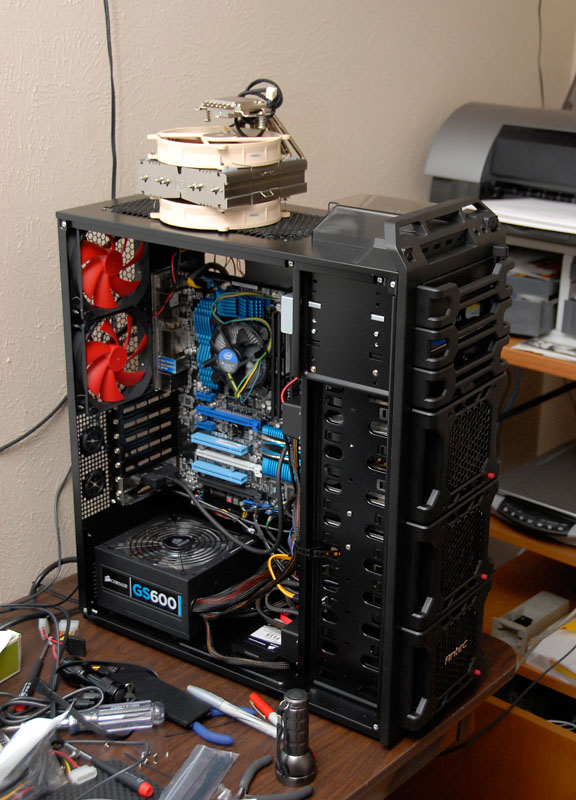 Cooling Transplant Coming Up!  Note the relative size of the currently installed Intel "stock" cooler.  The Intel guy did not like first stress test I threw it (board temp exceeded 85 deg C), so I knew I had to step up the cooling.  The new cooler keeps the temps under 70 under the worst conditions, at least so far. 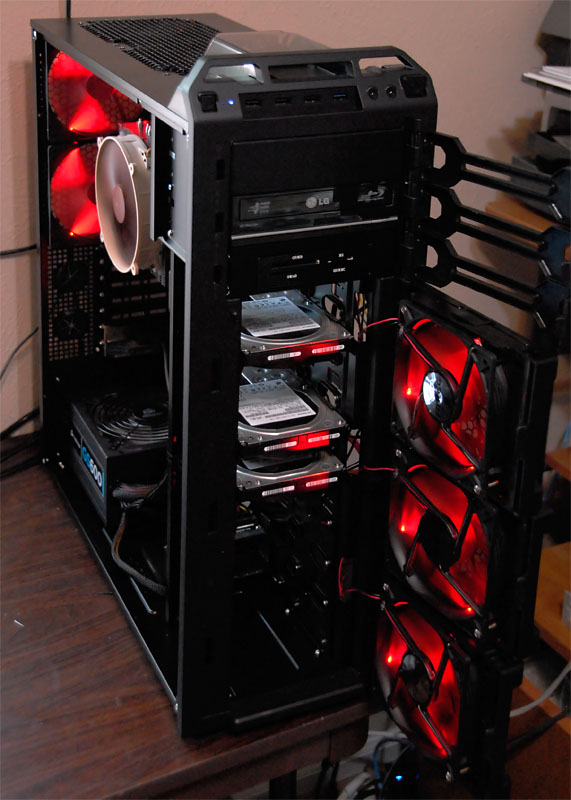 Hitachi 5400 RPM drives (bottom, 2x 3GB) provide the pure space part of the storage system, while a 115GB SSD drive (out of sight at the bottom of the case) holds Windows 7 and the applications for a super-responsive system.  The case provides plug-in disk drive ports for simple disk swaps.  There are 4xSATA 3 (6GBit/s) 4xSATA 2 (3Gbit/s) ports, plus an E-SATA port providing support for up to 9 SATA storage devices. 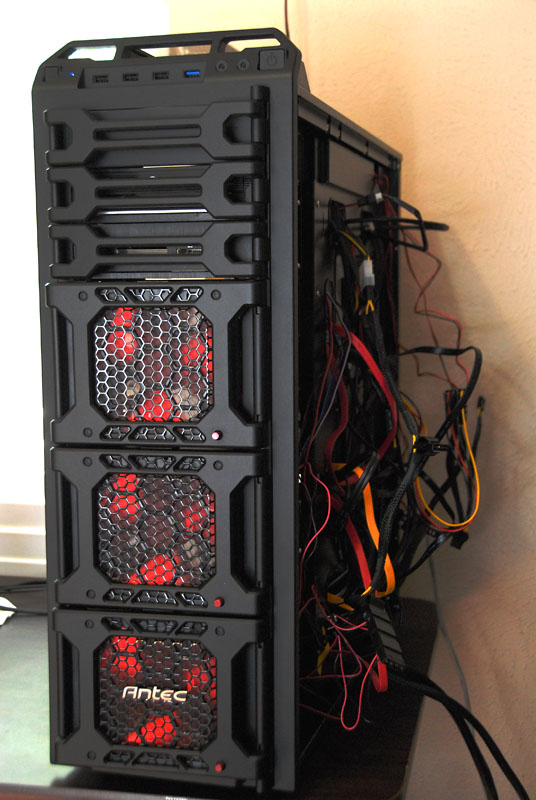 The right side panel will cover the wires. Believe it or not, I tried to be very careful where I placed the wires on the computer, since the case I ended up with has a clear side door.  The case provides a number of convenient routing paths that make this a bit easier.  The disk drive wires were tough (yellow and red) to run to the bottom as a pass through area didn't quite line up with the board connectors.

Multiple Core Computers are critical for image processing!  I found my 2004 model single-core laptop just wasn't cutting it when processing images in the field, and I've been watching laptop prices and features carefully since the new Intel "Core I-" processors came out.  Best Buy had a good deal and 11/2010 I acquired a  Dell Inspiron N7010 laptop with these features: 17.3" LED screen, Blu-ray optical drive, 640GB hard drive, 6GB memory, Windows 7 64-bit OS, and a Intel Core I5-460M processor.  (There has been a worldwide shortage of blu-ray drives for notebook computers, and laptops with blu-ray are hard to find and command a premium price.)  Complete specs for the true geeks are further below.

Compatibility:  I recently cautioned people regarding 64-bit Windows for astronomy applications due to possible compatibility issues.  The advantage of 64-bit operating systems and software is that they can address (use) more than 4GB of memory, which is helpful in processing large amounts of image data.   My QHY8 CCD Camera now has 64-bit compatible drivers, which opened up the 64-bit  door for me. 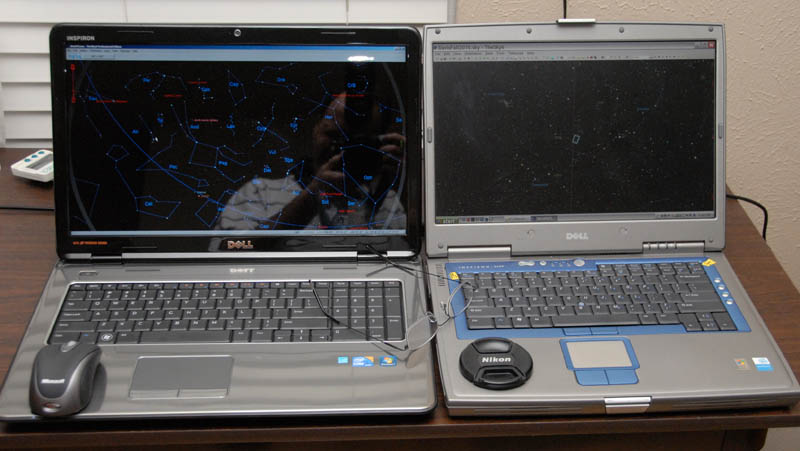 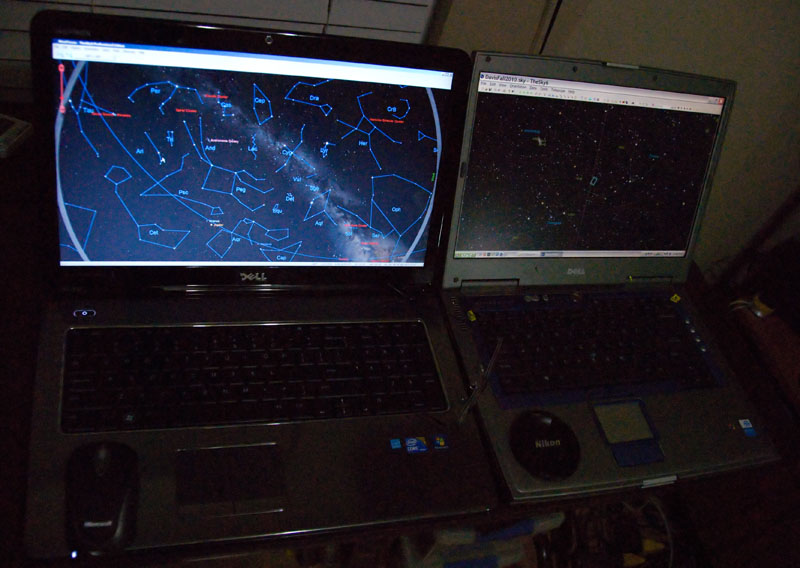 The Sky X on the newer Dell, The Sky 6 on the right