The new web page dedicated to the Home Theater creation process is here.

August 2018 Update.  I'm just about there with the Home Theater setup in our 13x16 media room.  I settled on the equipment below based on talking to dealers and installers (not always the best source of information) and a fair bit of research with the afsform.com being particularly helpful. 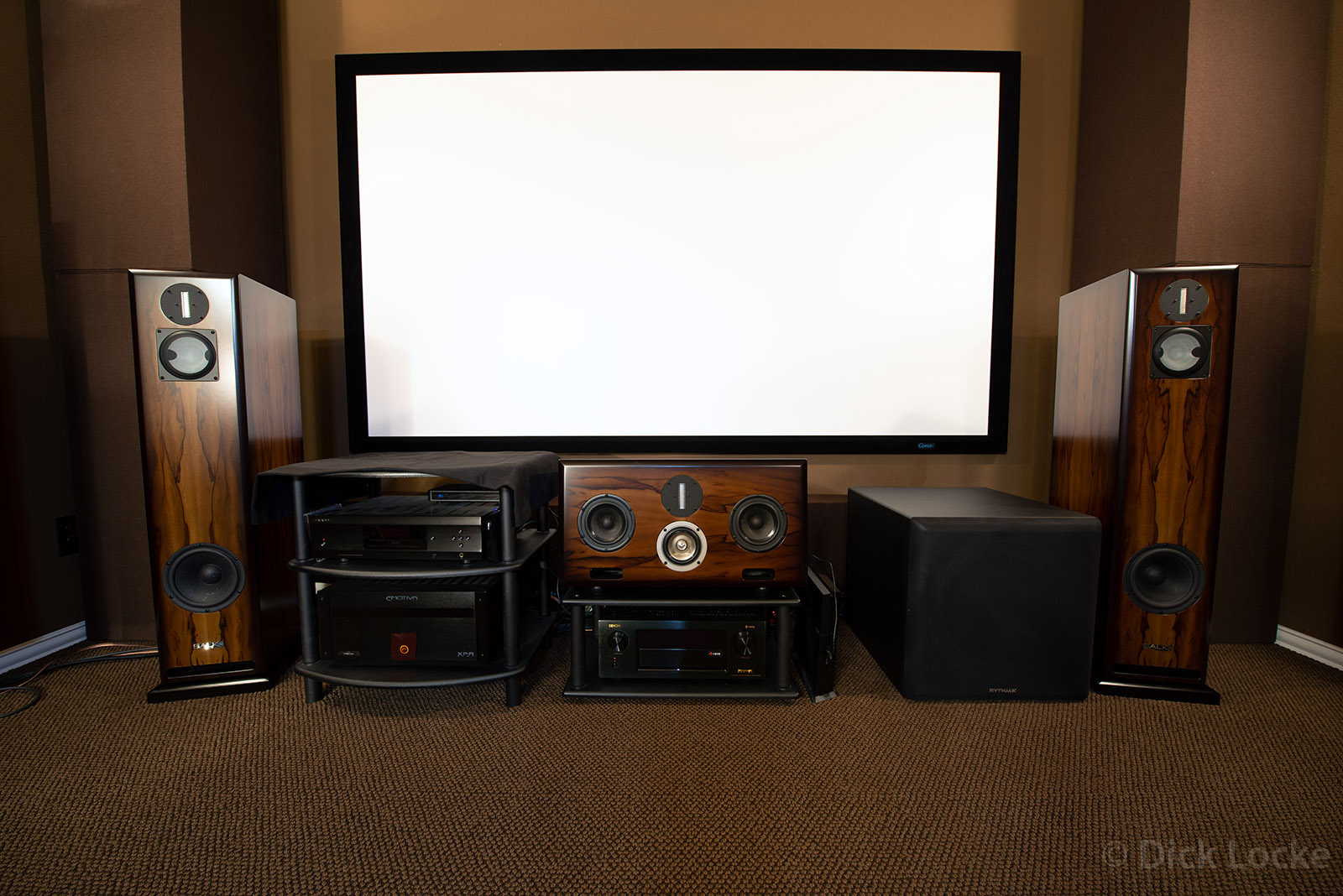 Home Theater with the Salk Speakers

The speaker veneer is "Chen Chen" with a dark walnut dye & bust (darkened) edges and satin matte finish.  The natural wood has more contrast but I asked Jim Salk to darken them up for my home theater application.  The character of the wood still comes through nicely.  Salk speakers are known not only for their sound but for the incredible cabinets and finishing.  I'll probably put the grille cover on the center channel at some point & leave the L/R au naturel.

It's quite a challenge getting a good rendition of the exact colors as there's no natural light in the HT room.  I used a tripod, the room's incandescent lights, and a long exposure to get these shots.  (I'm not really interested in dragging the speakers into another room after getting them set up at 72lb each.)  This is low view shot with a wide-angle lens on a tripod, the speakers are rectangular though this shot makes the cabinets look asymmetrical. 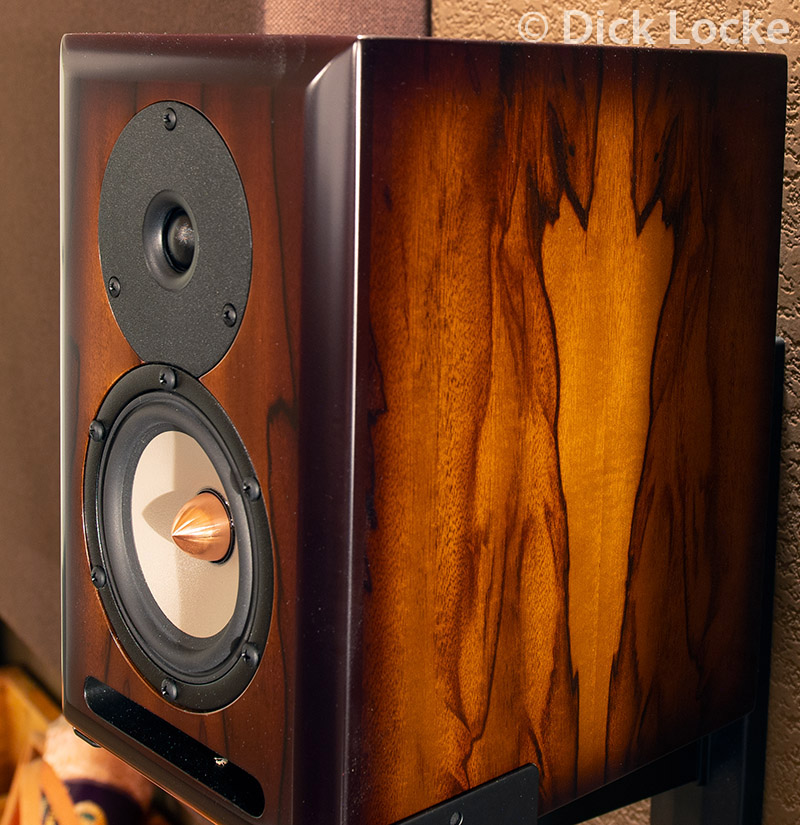 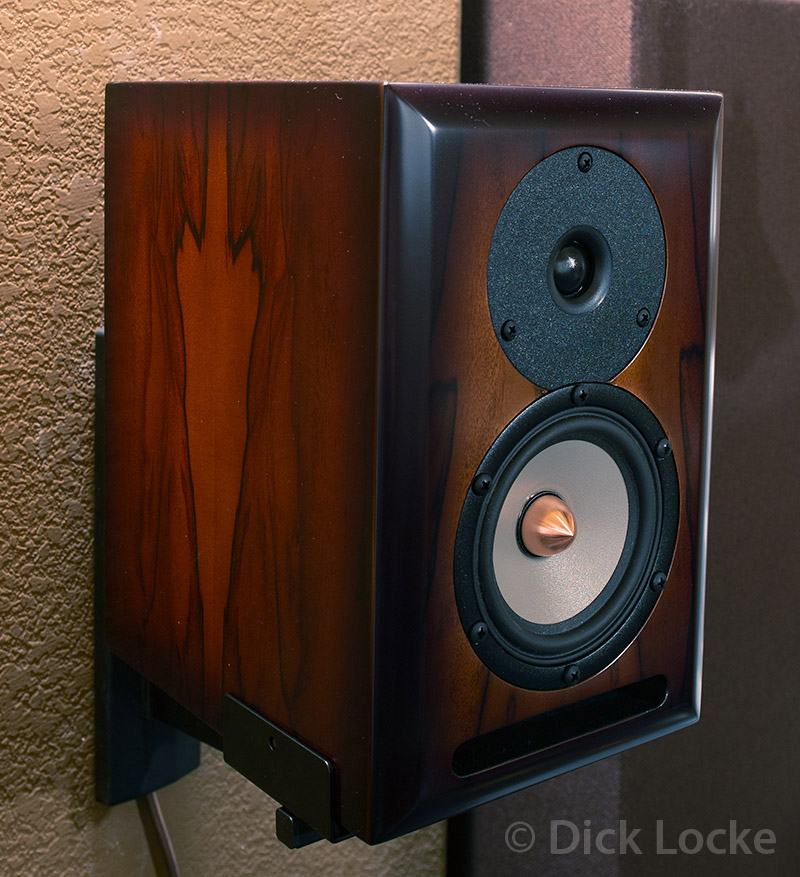 Notice the symmetry of the veneering on the two different speakers. 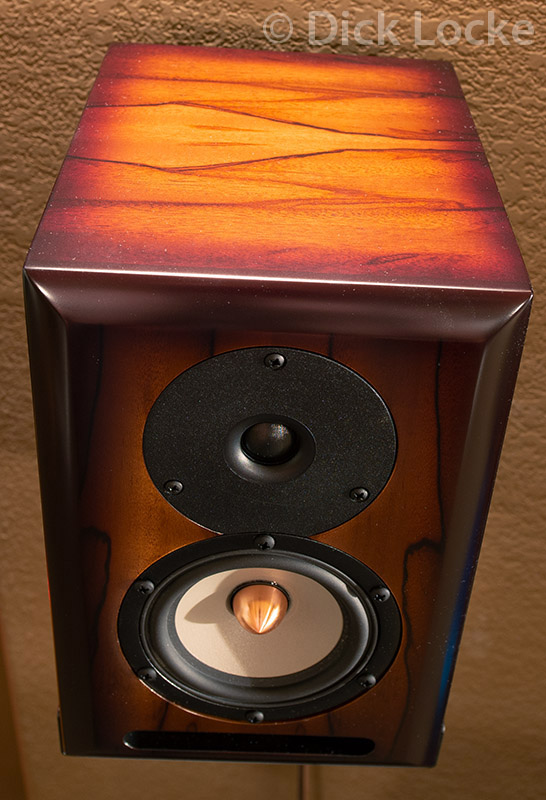 The nature of the lighting makes the top appear much redder than it is in this pic.

This page has pictures and information about audio and video topics.  My personal AV reference page discusses my search for speakers, including what I listened to & considered before purchasing the Ascend Espresso Sierra Towers & Horizon speakers with RAAL ribbon tweeters for my home theater/music system.  Scroll down for in-room measurements. 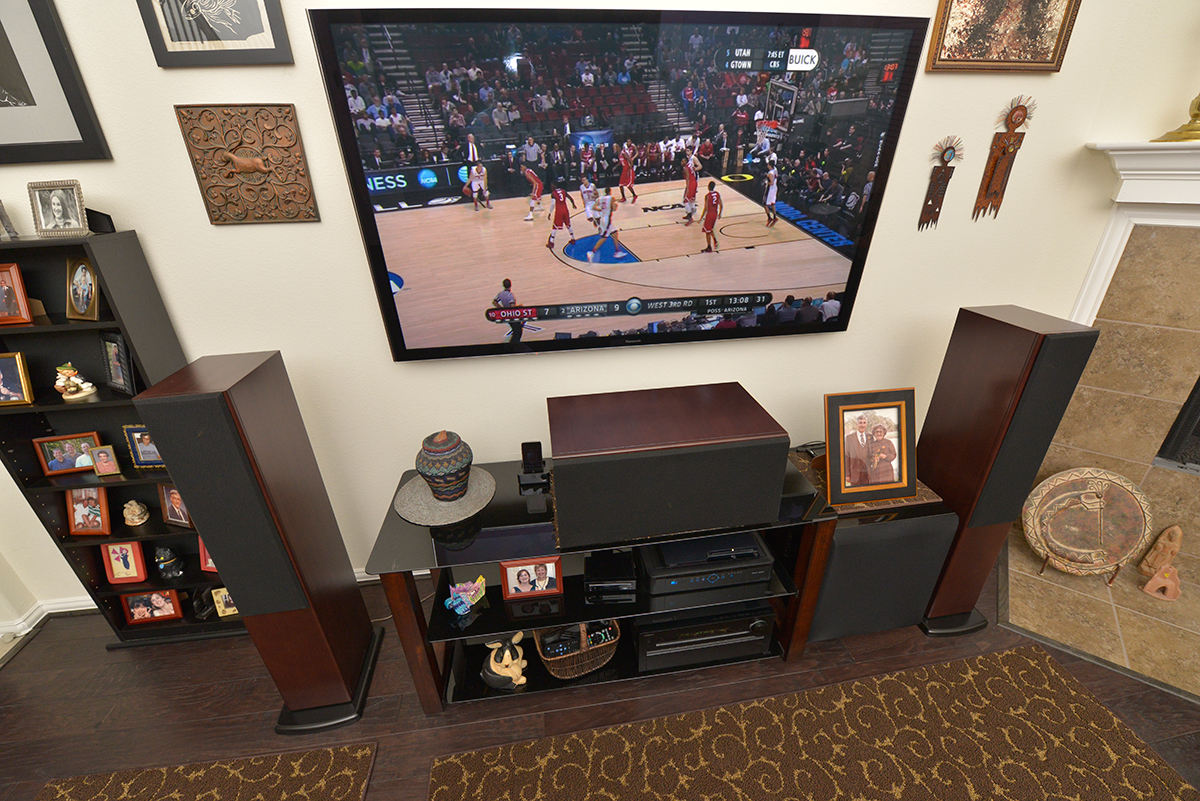 The Ascend speakers feature the RAAL ribbon tweeters and show the satin espresso finish. The TV a 65" Panasonic Viera TC-P65VT30, and the center channel speaker is  11" x 23" x 12.5" for size.  That's an Onkyo TX-NR818 receiver (manual, AVS thread) on the bottom; I bought a refurb receiver to get the more advanced Audyssey MultEQ XT32 which was dropped in the latest models in favor of Dolby Atmos.

The subwoofer is a Rythmik E15HP 15" sealed signature edition.  Added in early 2015, it allowed me to move the old Def Tech 15" upstairs into the bedroom system with the Sierra 2 monitors.  The E15 is Rythmik's smaller 15" sub, which was perfect for me as I'm space-constrained due to spousal placement requirements.  It is 2" narrower than the sub it replaced, and while it's a bit deeper I had enough room.  The sub is much more articulate than what it replaced.  I was kind of freaked out by the Audyssey setup tones from the sub; instead of the muddy thump I'm used to from subwoofers it sounded a lot like the pulses from the main speakers.  I had to double check that main speakers weren't on somehow!  The sub also plays with plenty of volume, no problem filling the room at -3 dB from reference which is as loud as I go.

About the pictures:  I used a wide angle lens (Nikon 14-24mm) so you can see there's some geometric distortion from that.  The color balance on the above should be pretty accurate.  I used an indirect flash on the Nikon 610 body and the jpegs from the camera provide the color balance.  The walls are a subtle yellow color that is reflected pretty well in the above image, and a bit washed out in the next two. 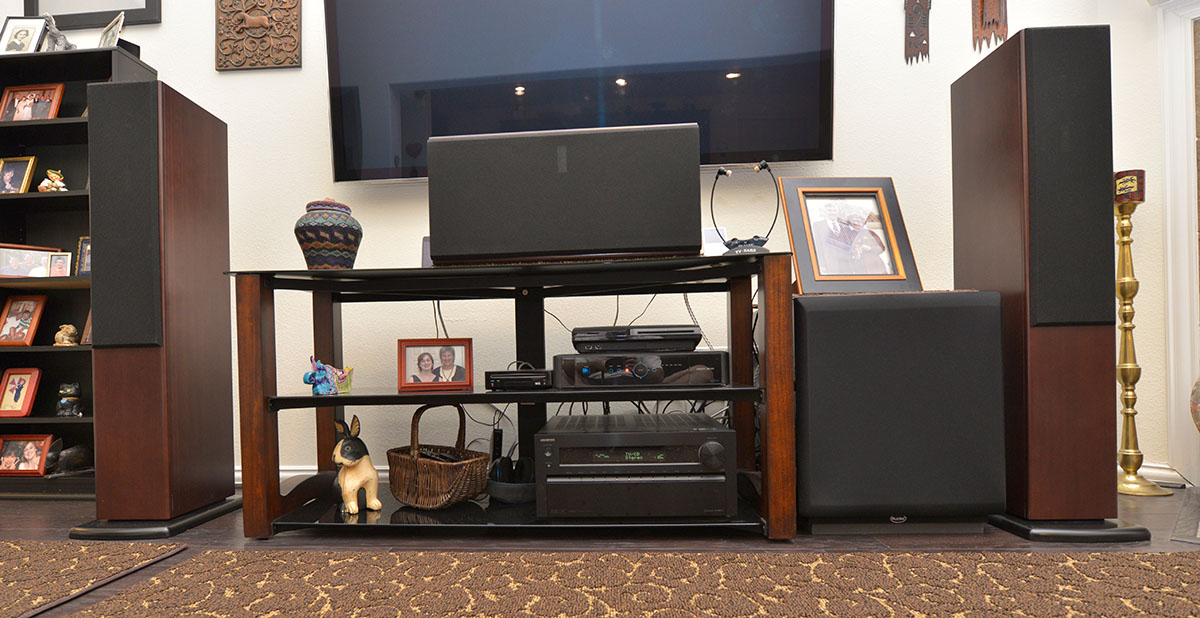 You can see the RAAL tweeters faintly through the grilles on these shots. 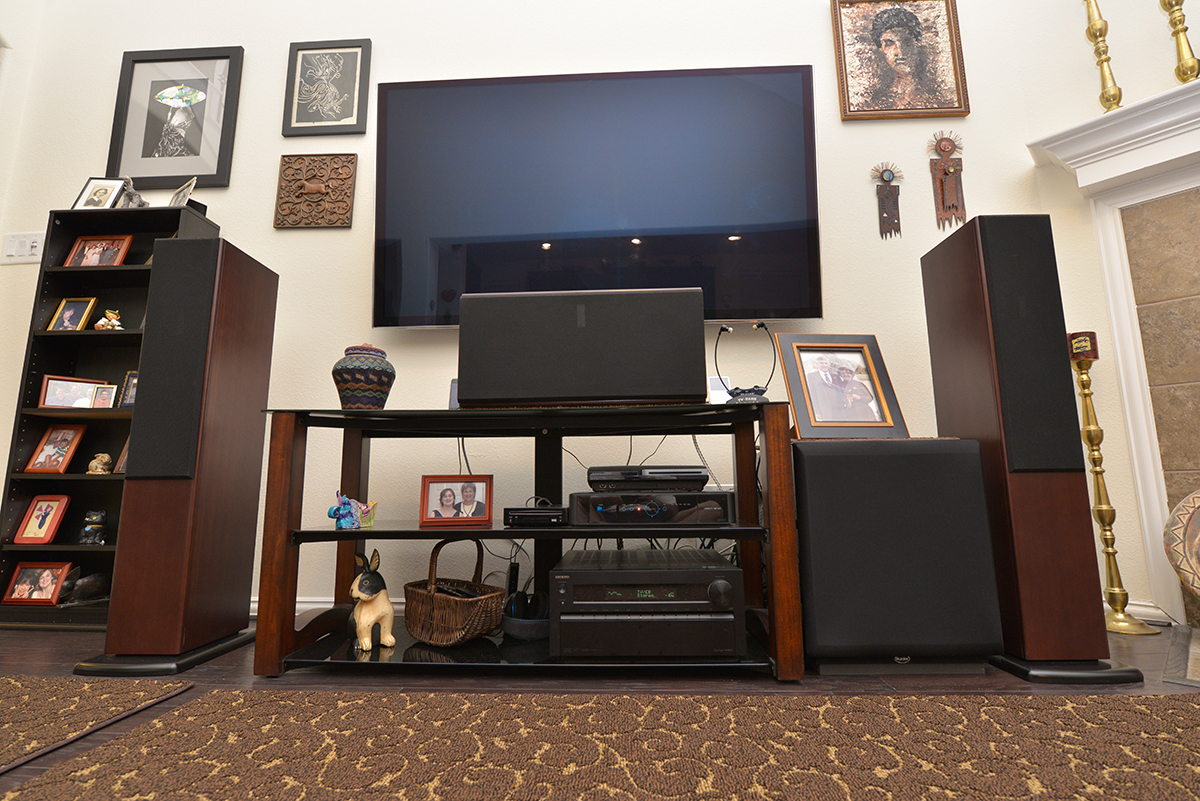 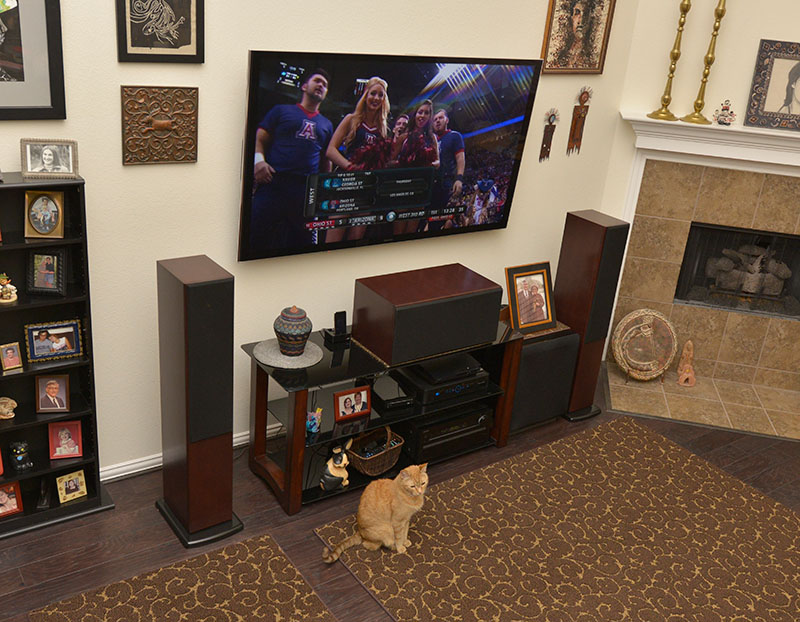 Below: Measurements using REW (Room EQ Wizard) and the UMIK-1 calibrated microphone.  I used the HDMI input but not ASIO (ASIO allows you to drive individual channels via HDMI).  These measurements were taken with my old Definitive Technologies 15" sub, not the Rythmik. 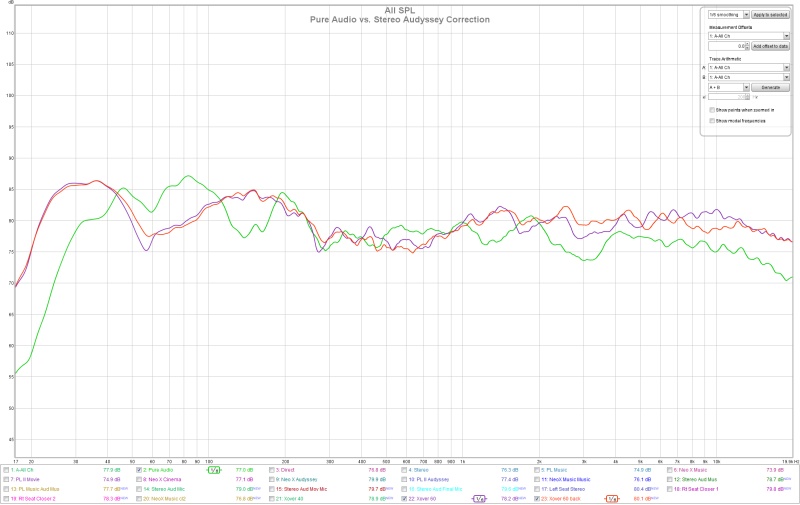 Stereo (L/R only) with Audyssey correction compared with Pure Audio (green trace).  Note the only difference between the red and purple traces was the microphone placement.  Interesting to note that the Towers are flat to 32hz, and have plenty of power down to 27hz. 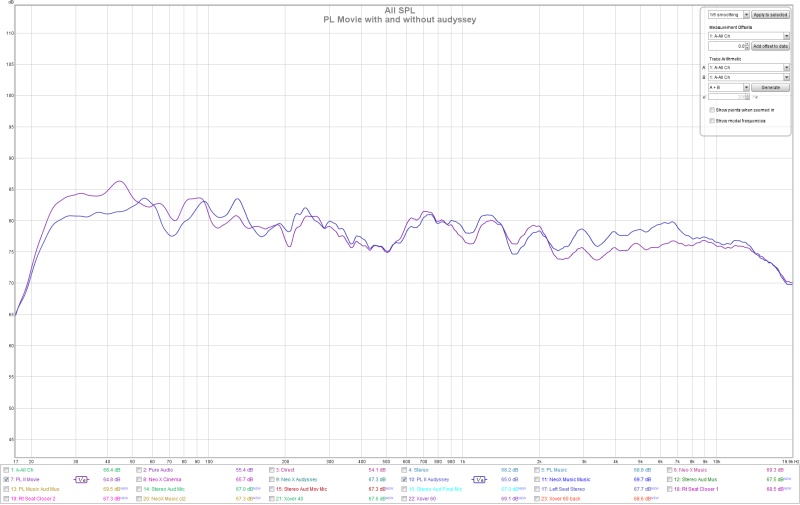 This shows the difference between the Dolby Pro Logic setting with Audyssey (blue) and without (purple).  You can see Audyssey correcting the bass/subwoofer levels, and bumping the upper treble a bit. 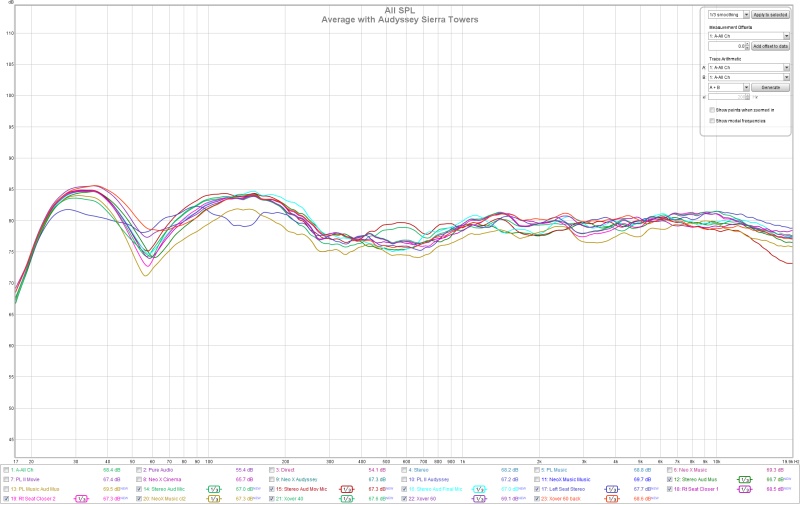 This shows a number of readings taken from different positions.  The bass varies in part because I was experimenting with the crossover for the sub.  I found that flattest results came from a 60hz crossover.  The bass null around 50-60Hz varies quite a bit between the left and right seats.

Below: Pictures with the old Def Tech sub.

If you have questions or comments you can reach me at dtlnew at yahoo dot com.

Compare the Pure Audio, Direct, and Stereo (my notes say no Audyssey correction on for stereo) settings.  Stereo brought in the subwoofer, which before tweaking resulted in a null around 50hz (where I was crossing over the mains to the sub.)   Moving the crossover to 60hz corrected that nicely.