M17, the Omega or Swan Nebula Pictures
All images and text on this web page Copyright © 2000-2006, Dick Locke.  All Rights Reserved.  Contact and Image Use Information 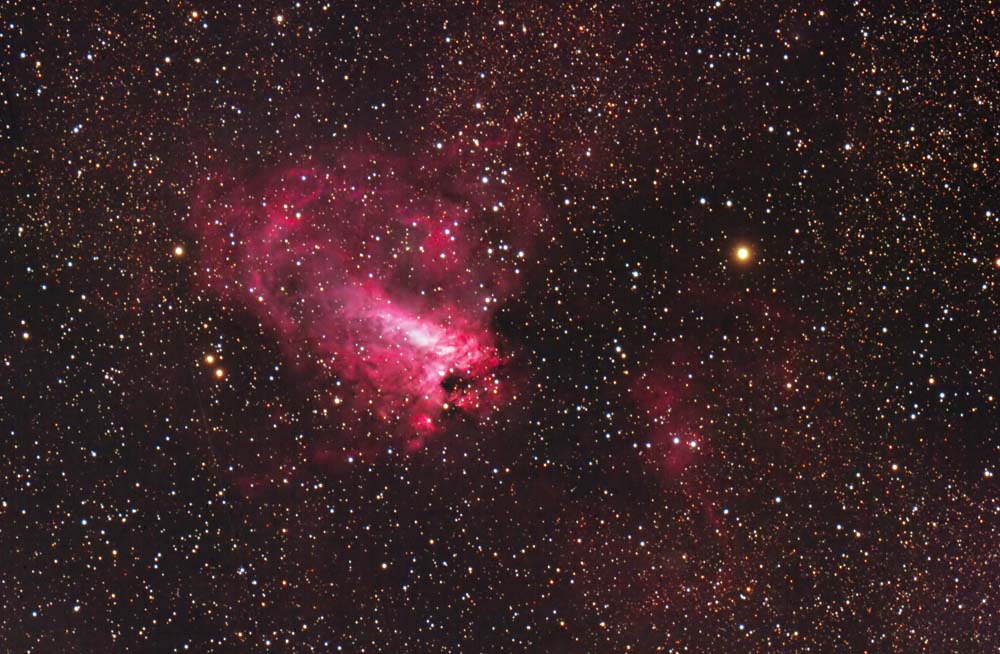 M7 is the bright object on the left, and this image also features IC4707 and IC4706.  M17 is in Sagittarius, so it is low on the summer horizon even when at its best.  I started these images before it was completely dark, but they turned out OK.

Image notes:  The above is my 10/2006 DSLR shot from Starry Nights B&B.  It was shot the normal way except for the flattener:   Image details. 8 x 4 = 32 minutes total exposures from the morning of 10/20/2006   Canon EOS 20Da (unmodified), Takahashi TOA 130 (a 5" APO refractor), Tak Flattener, Losmandy G-11 mount.    My current image processing workflow is here.  Compare with my older film shot, below.  Note the total exposure on the image above is 18 minutes less than the film image.  The linear response of the CCD chip in the DSLR allows more information to be recorded than with film given the same exposure time.  Other: Starry Nights October 19th and 20th 2006

Notes on the film image, above:  M17 is one of many interesting objects in Sagittarius, which is towards the heart of our Milky Way galaxy.  I had to work for this shot, as I started it at 4:53 a.m. and ended around 5:45 a.m.  This was the one night during my April trip the Davis Mountains where it was good *all* night.   I'm glad I stayed with it to get this shot.

Processing: I scanned this on my new Nikon film scanner.  I used Vuescan software to have the scanner do 17 passes for the best possible scan.  There are a lot of stars in this image (keep in mind you're looking towards the center of our galaxy).  Due to all the stars and detail in the nebula, this image ended up being fairly large (115K) even with aggressive jpeg compression.   Email me if you want me to send you a version with max. detail.