I have struggled a bit in finding a suitable image processing workflow with the Nikon D810A.  Here's what I do right now, followed by a discussion of what did not work.

Do you have a workflow for the D810A that produces good results?  Please post to the D810A Yahoo Group!

Here's a detailed description of how I processed my Lagoon Nebula natural color image (located here).

For Reference: I start with something similar to below, but then freelance...  An approximation of natural colors may be achieved by the following narrowband blending:

This is a popular color combination as well; I will create both Hubble Palette and Natural Color images from narrowband sub-frames in most cases.

My Image Processing Workflow with the QHY8 "One Shot Color" Camera

I am using the recommended workflow in Nebulosity and then use Registar and Photoshop as outlined below:

There are lots of ways to "add color" to a flat DSLR astronomy image.  A classic: apply an "S" curve to the image.  (Image->Adjustments->Curves, pull up the right/bright part of the curve, and pull down the left/dark part of the curve.)  You can use Image->Adjust->Hue/Saturations, but purists shudder at this.

However, using this LAB technique has advantages as enumerated in Dan Margulis' books including "Photoshop Lab Color" and "Professional Photoshop."  It's pretty simple. 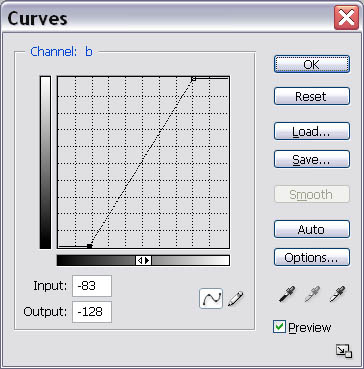 Above: Adjusting the b channel by equal amounts.  By making the curve steeper, you increase the visible differences between colors, increasing the color range of flat images.

Below Right: Some color is starting to show after using the lab technique described here.

As of 2012 I tend to use Noel Carboni's Photoshop actions to select and shrink stars.

Instead of (de)selecting stars, what I do is to subtract stars, enhance
everything else, and then add the stars back.  Stars can be subtracted
using a high-pass filter.  The basic steps are like this:

There are several variations.  For example, you can very easily
select the non-stellar components in the product of step 3, set
the background to black, then push the 'delete' key.  This will
prevent nebula components being subtracted in step 4.  You can
also do more than two times of star subtractions with increasing
radii in the high-pass filtering.  This will get rid of stars more cleanly.

I've often thought that DSLR and CCD images seem relatively flat and monochromatic when compared with the film images from back in the old days  This is true especially in the reds, where DSLRs generally have a relatively weak deep red channel.  Popular astrophotography films have had a strong red response, including Kodak's PJ400, LE 400, and Supra 400 (all out of production), as well as Kodak E200 and Fuji's SHQ 200.  A reason red is so important: Hydrogen Alpha nebulae glow at a wavelength of about 656 nanometers.  Any sensor, be it film or a CCD/CMOS chip, that has poor response in this area will be omitting a critical component of the image of the sky where H Alpha is present.  My previous DSLR, a Nikon D100, had a weak H-alpha response, along with relatively high noise.  The Canon EOS 20Da was dramatic improvement in both these area.  That camera had a modified design especially for astrophotography, but still shoots perfectly good daylight images without any special filters.  (Good info on H alpha here.)  In early 2008 I had my 20Da modified to further improve its H Alpha response.