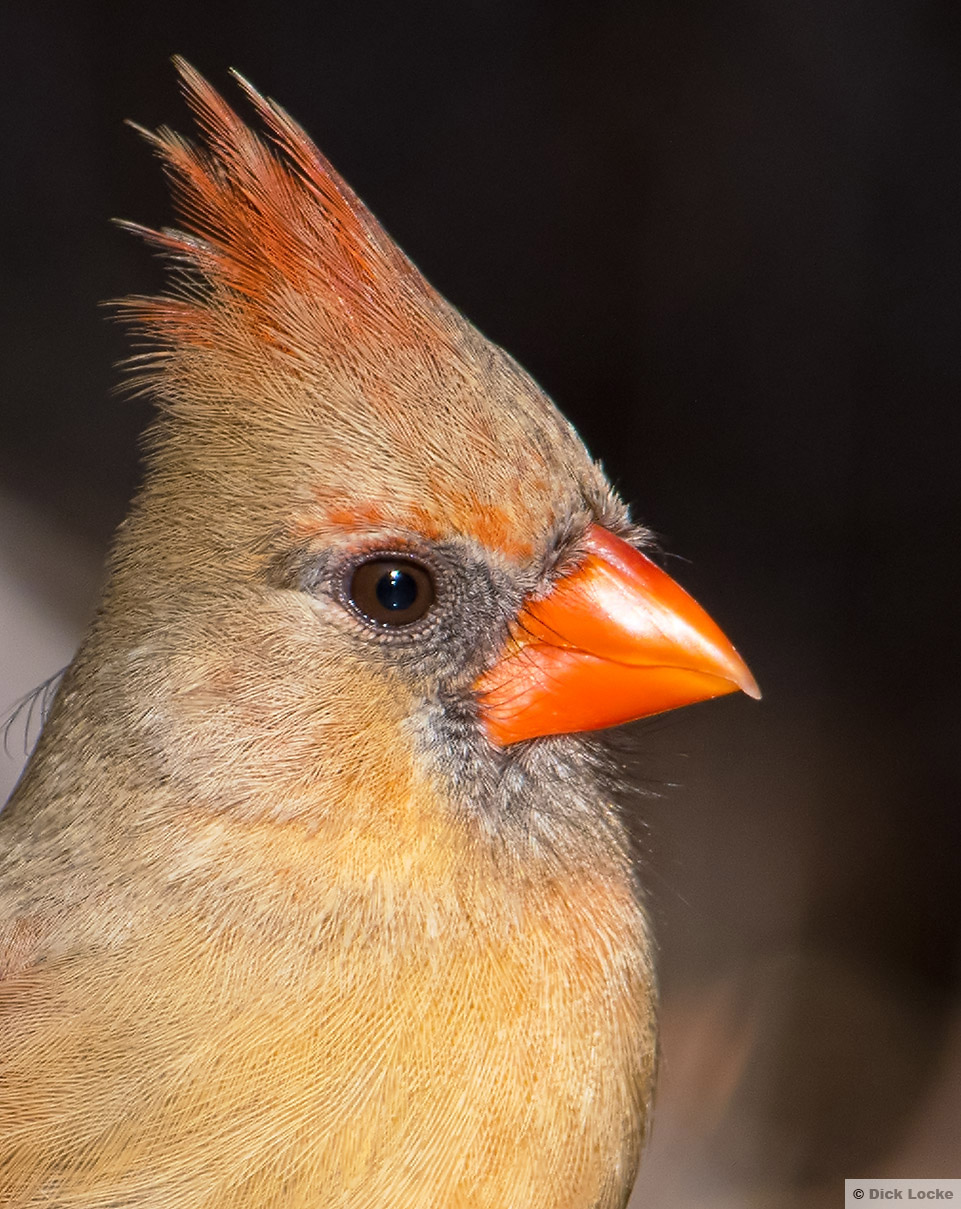 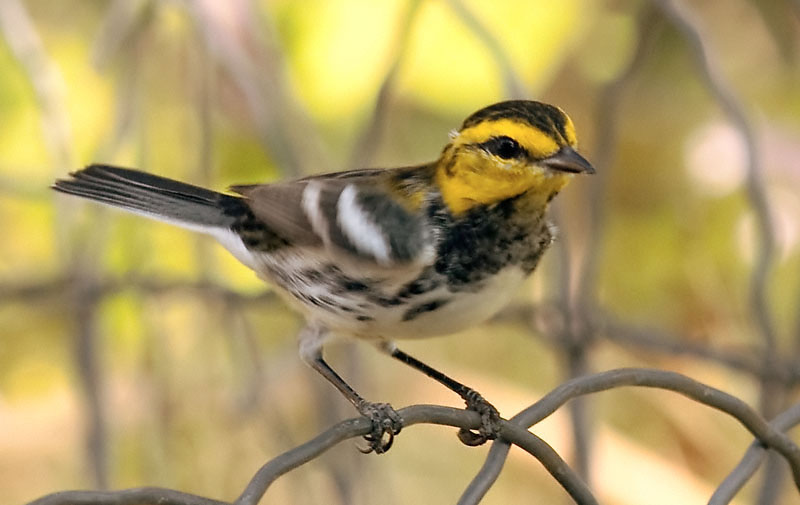 The Golden-cheeked Warbler is a rare and endangered species.  This image is from June, 2011 near Wimberley Texas.  Shortly after our arrival I noticed a bird I hadn't seen before outside the cabin and grabbed a few shots during her brief visit to the bird bath.  (Fortunately I had the telephoto lens mounted on the monopod standing next to the door, ready to go!)

My friend Gil once again provided the ID and the following comments (thanks again Gil!):  This is a female Golden-cheeked warbler. This gem breeds only in 30 counties of the Hill Country of Texas, and is the second rarest of all remaining American warblers. It requires riparian habitat with Ashe junipers. Rapid urbanization of its habitat around San Antonio and Austin, as well as intentional destruction of its habitat in anticipation of its federal listing as an endangered species in 1990, are thought to be large factors in this species' decline.

The Texas Parks & Wildlife Department has a lengthy tract on the Golden-cheeked Warbler at this link.  The same source has an abbreviated discussion and map showing the bird's Texas range here.  This links to the Wiki page.  Details: Nikon D200, Nikon 300mm f4 ED lens, 1/180s at f7.1, ISO 400. 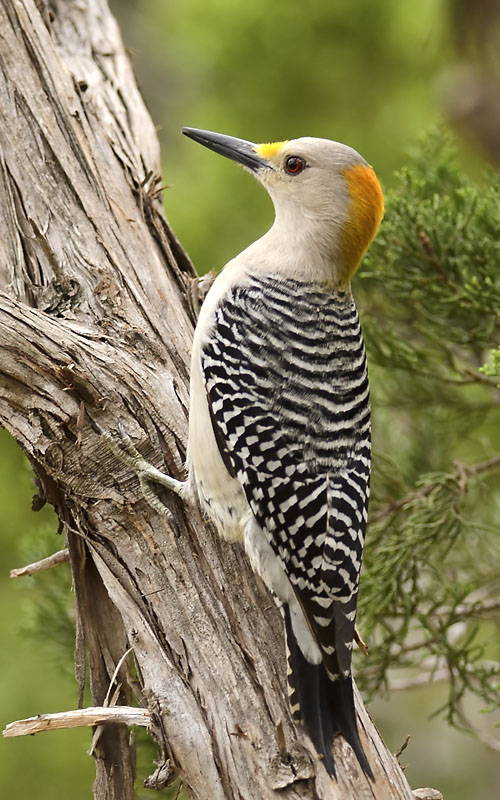 I saw and shot several birds, including the Golden-fronted Woodpecker, for the first time during my spring 2012 trip to the Starry Nights B&B in Wimberley, TX.  The owners have put up a nice bird blind and have done a fine job in attracting birds. I'm guessing female but expect confirmation soon.  One again my buddy Gil provides some great info: Golden-fronted woodpecker, female:  In birds, "front" means forehead, or the area in front of the eye and above the bill.  The male would have a red, not a gray, crown.  This species is a Central American one, found in the U.S. only in west-central Texas up barely into s.w. Oklahoma. It is common, and where their ranges overlap, the Golden-fronted woodpecker hybridizes with its eastern counterpart, the Red-bellied woodpecker.  Note your photo of the sitting bird shows well a yellow wash between the legs (this would be red in the Red-bellied woodpecker). I see a single tiny black spot on the rump of the hanging bird, which may mean your bird has some Red-bellied genes. The black spots on the rump are characteristic of Red-bellied, whereas Golden-fronted has a pure white rump. 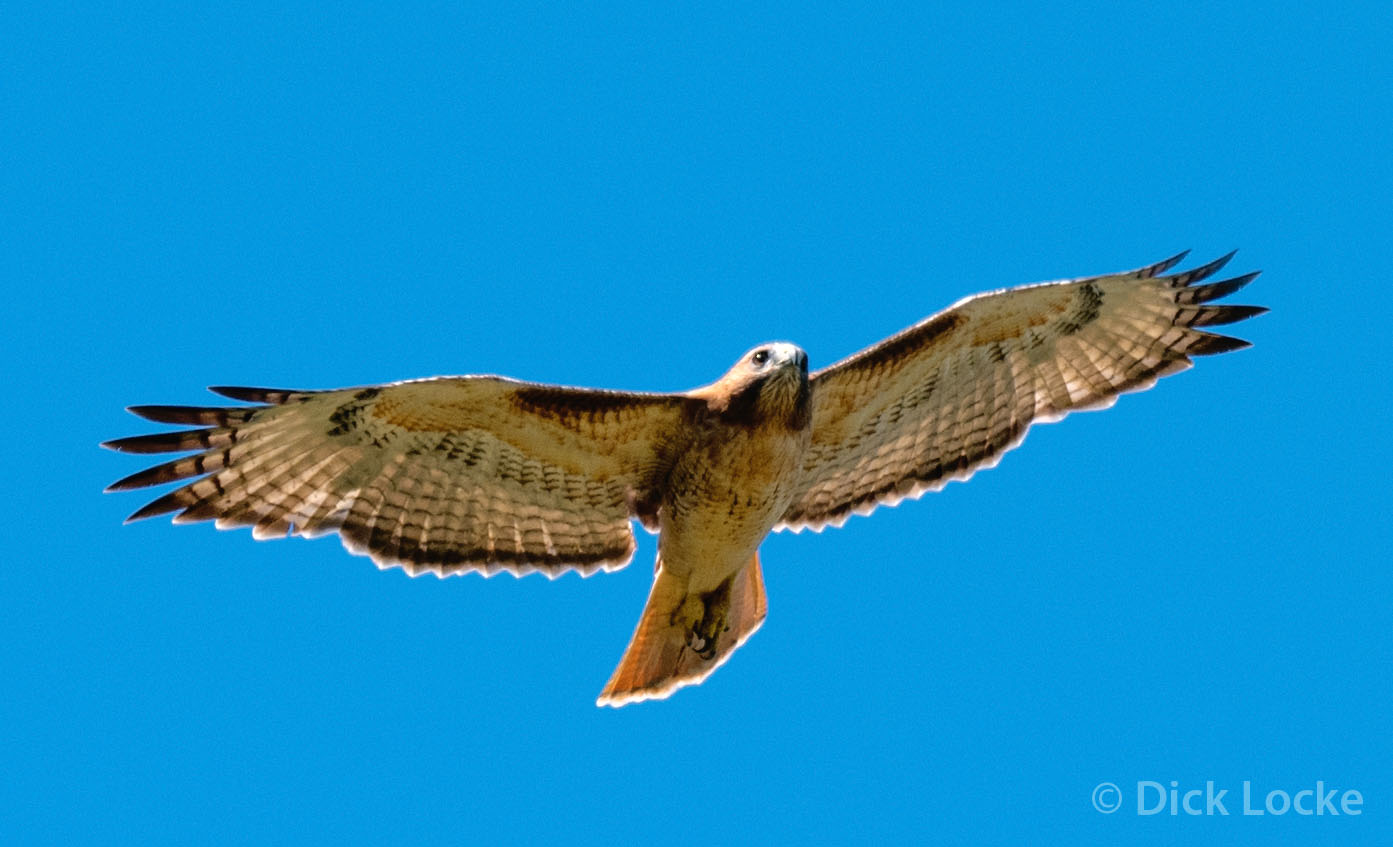 These guys like to keep to the underbrush.  This was the first time I've seen a Spotted Towhee; I also have a picture of a Canyon Towhee from the Davis Mountains here (towards bottom of page).  Gil provides this info:  Spotted towhee, male:  This species was split from Rufous-sided towhee, with the eastern counterpart being named the Eastern towhee. Eastern towhees winter to eastern Texas, with the Spotted towhee being more common in winter in western Texas.

This was my first time noting a Dark-eyed Junco.  Gil comments: Dark-eyed junco:  This looks like a female of the "Oregon" race, with its light brown sides. Several races of Dark-eyed junco winter in Texas. The ones found in Houston are likely to be "Slate-colored" juncos. 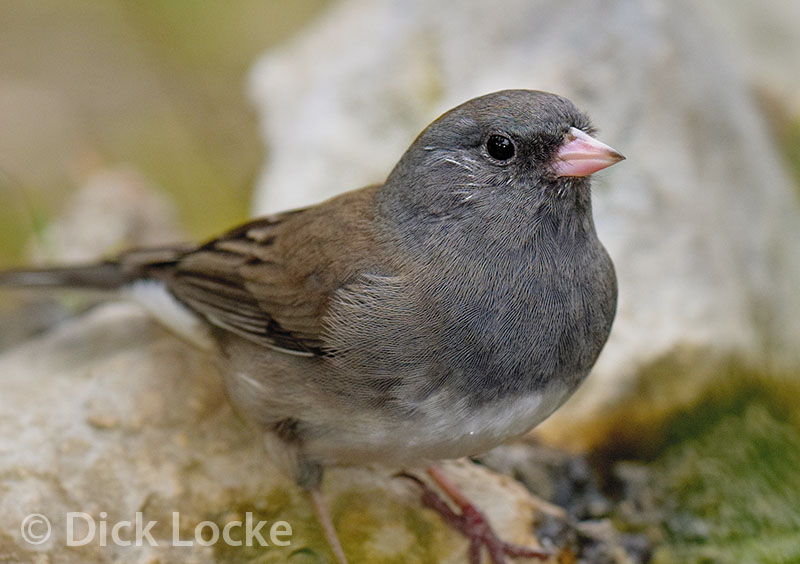 This is from late fall 2016.  Info from Gil:  Your junco is indeed a Dark-eyed Junco, likely a female...  (RL: and upon examining a different shot)  ...The flanks are not pure gray, but a mixture of gray and brown. So, this is not a pure “Slate-colored”, but a mostly Slate-colored intergrade. Crosses between different species are called hybrids. Subspecies are not so clearly delineated, so crosses between them are much more common than crosses between species, and are called intergrades.  One of the best examples of this is the Northern flicker, where we often see intergrades between Red-shafted and Yellow-shafted. You ought to be able to see those in Wimberly... 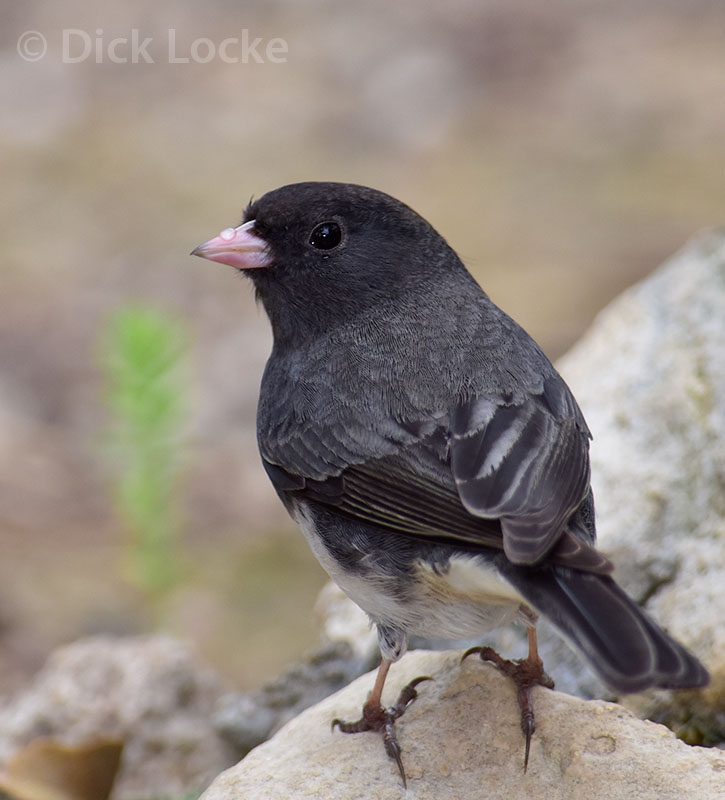 Looking through some February 2016 pictures I found this "usable" picture of a male.

Many Varieties of Sparrow 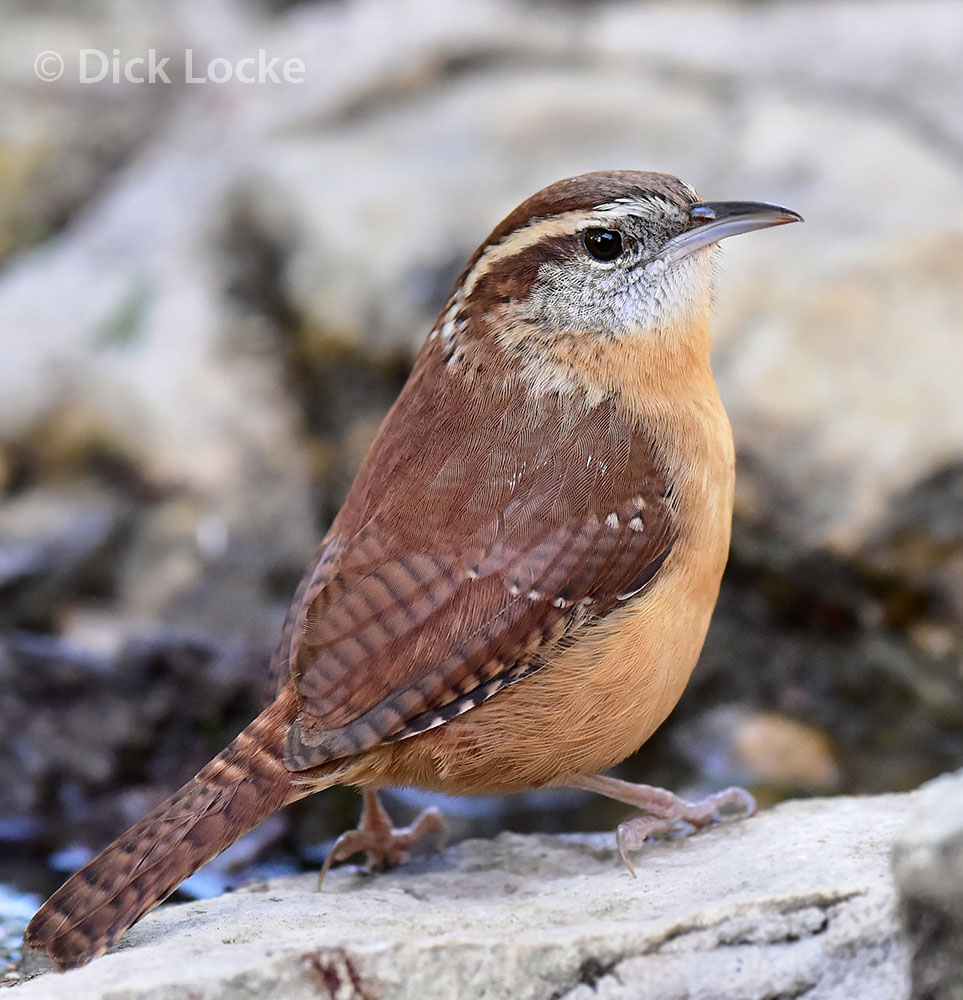 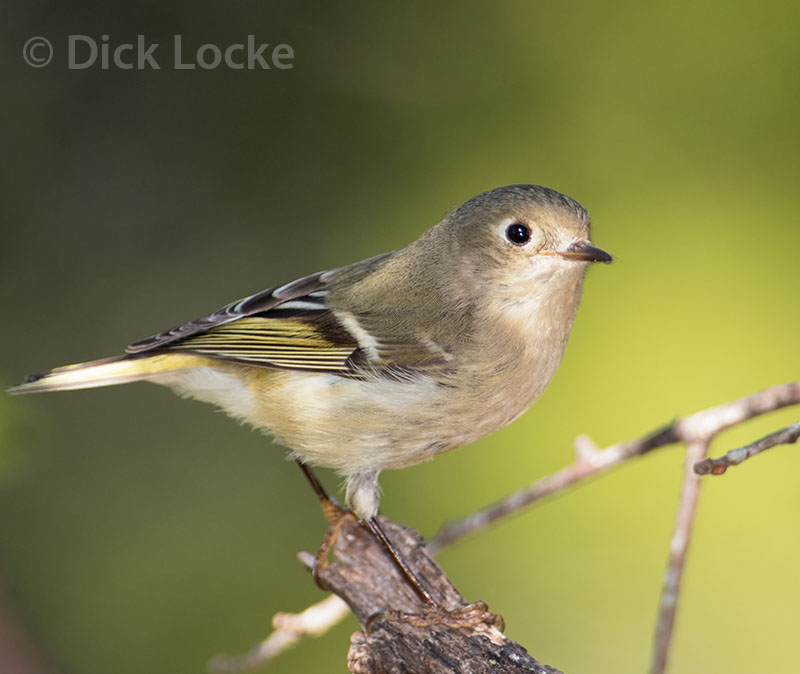 Ruby-crowned Kinglet. They only show their ruby crowns occasionally :-(

Unless otherwise noted, undated pictures are from the "Starry Nights" Bed and Breakfast near Wimberley, TX.