M78 and McNeil's Nebula Pictures by Dick Locke
Copyright © 2006, 2010 by Dick Locke.  All Rights Reserved.  Contact and Image Use Information 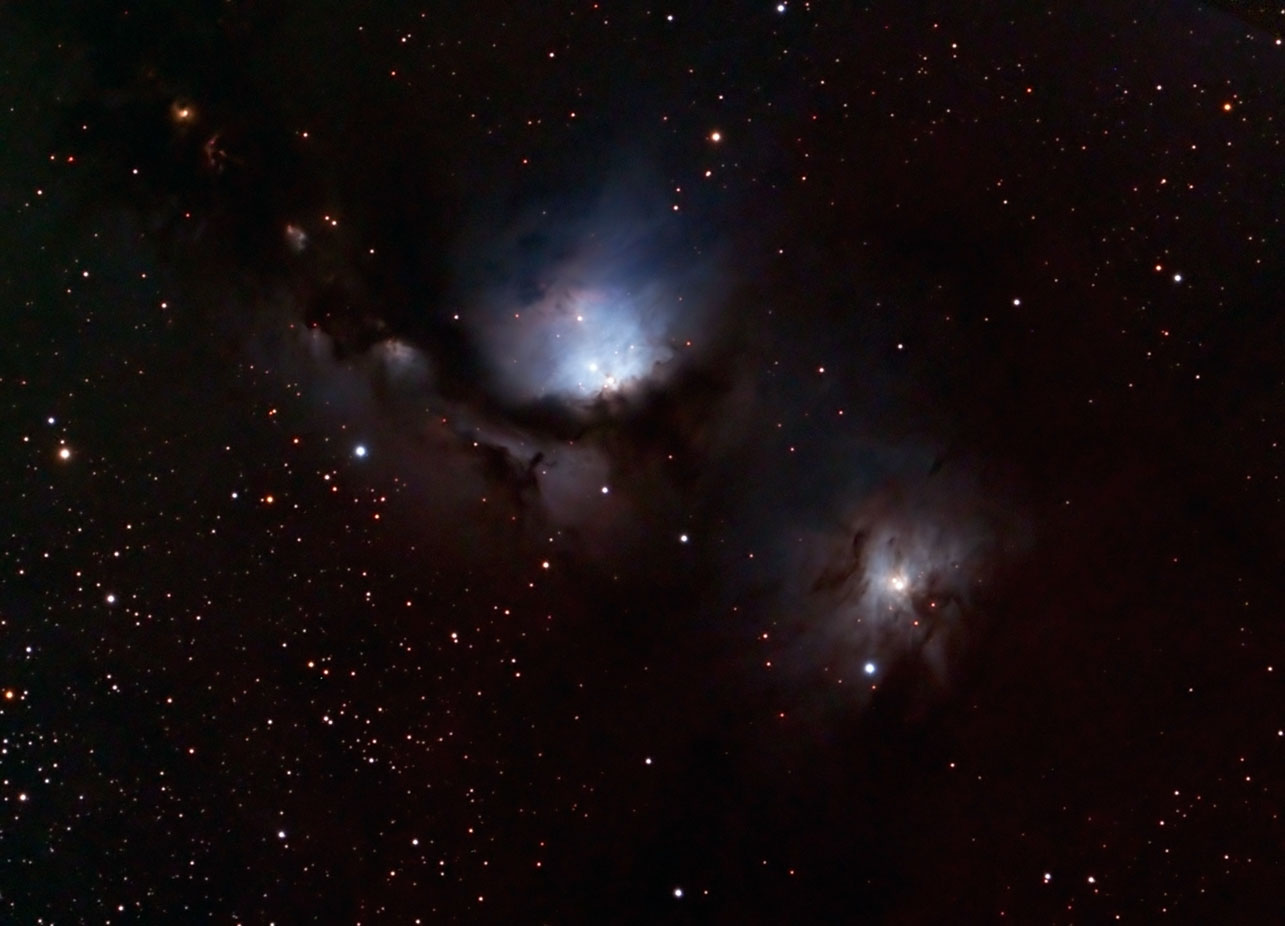 The pictures above and below show not only M78, but also McNeil's Nebula, named after Jay McNeil who used to live in the Houston area.  Jay made it out to the old NHAC site quite some time ago, and helped me locate one of the Messier galaxies in Ursa Major.  I had been trying to find M101 I think for about 45 minutes, and he had my scope on it in about 30 seconds.  He really knew his way around the sky!  This link leads to the SEDS write-up  about the nebula, and this link to a labeled picture (and see below).  The second night transparency was dicey; I was able to go from dark until about 10:00 p.m.  The transparency issues translated into so color challenges in the darker area of the images.  Makes one long for the clear dark skies of West Texas!
Details: 3 hours total exposure (36 x 5 minutes each) from Friday  & Saturday night, 3/12-13/2010 at the HAS site. Takahashi TOA 130 Telescope (a 5" APO refractor) with flattener,  AP 900GTO mount, and QHY8 CCD Camera & normal workflow.   Compare with the older version at the bottom of this page.  See also March, 2010, HAS site images. 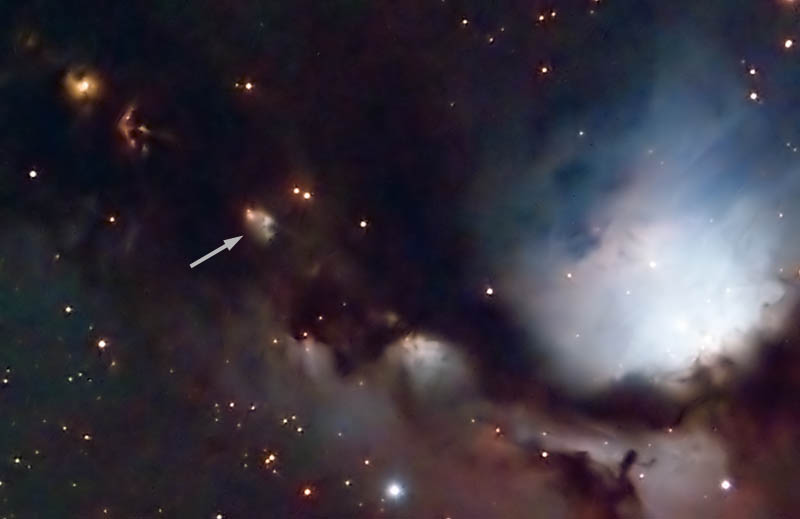 The arrow in the image above points to McNeil's nebula.  Check it out, you can see McNeil's Nebula on the fist picture from 2010, but not on the 2006 image (below.) 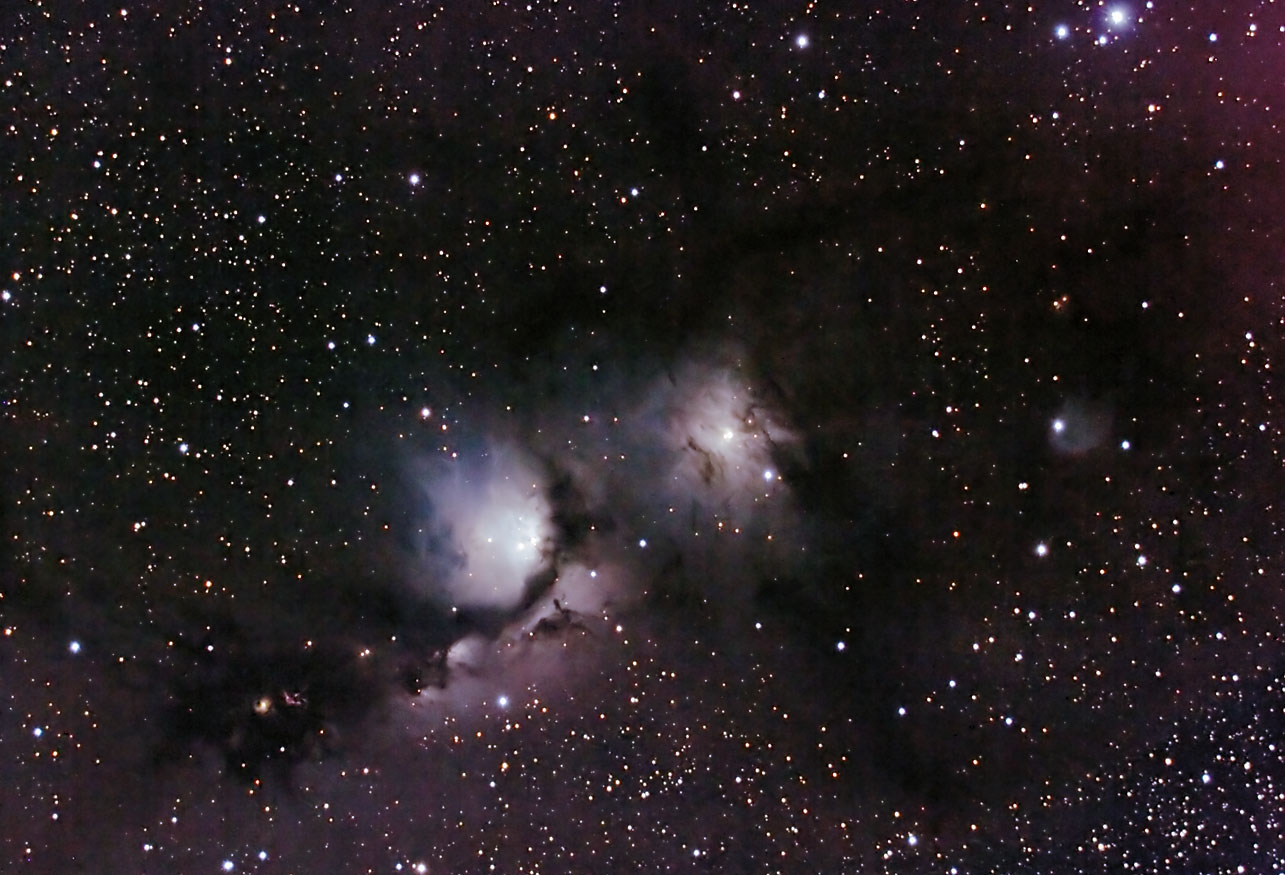 I've processed this relatively deep exposure to show all the interesting dark and dusty areas near M78.  There's a price to pay for such a "light" image, and the challenge is to deal with the noise inherent in the dark but not quite "black" areas.  How does it look on your monitor?

The comma shaped nebula on the right middle of the frame appears to be identified: "The astronomical database SIMBAD knows this nebula as "[B77] 100". It is the object #100 in C. Bernes' catalogue of bright nebulosities in opaque clouds which was published in 1977."  Thanks to Manfred Mrotzek on the APML for that.  In addition, Siebren Klein was kind enough to contact Owen Brazell, who provided this info: "I believe it is Bernes 100 or DG82, defined as a cometary refection nebula which would seem to fit the bill."  Ken Drake indicated his version of Megastar identifies this as DG 82, and also OS 62...

I believe the red nebulosity is part of Barnard's Loop.

I always have trouble picking a single best version of an image; see below for various cuts of the 2006 picture.

Copyright © 2006, 2010 by Dick Locke.  All Rights Reserved.
Contact and Image Use Information