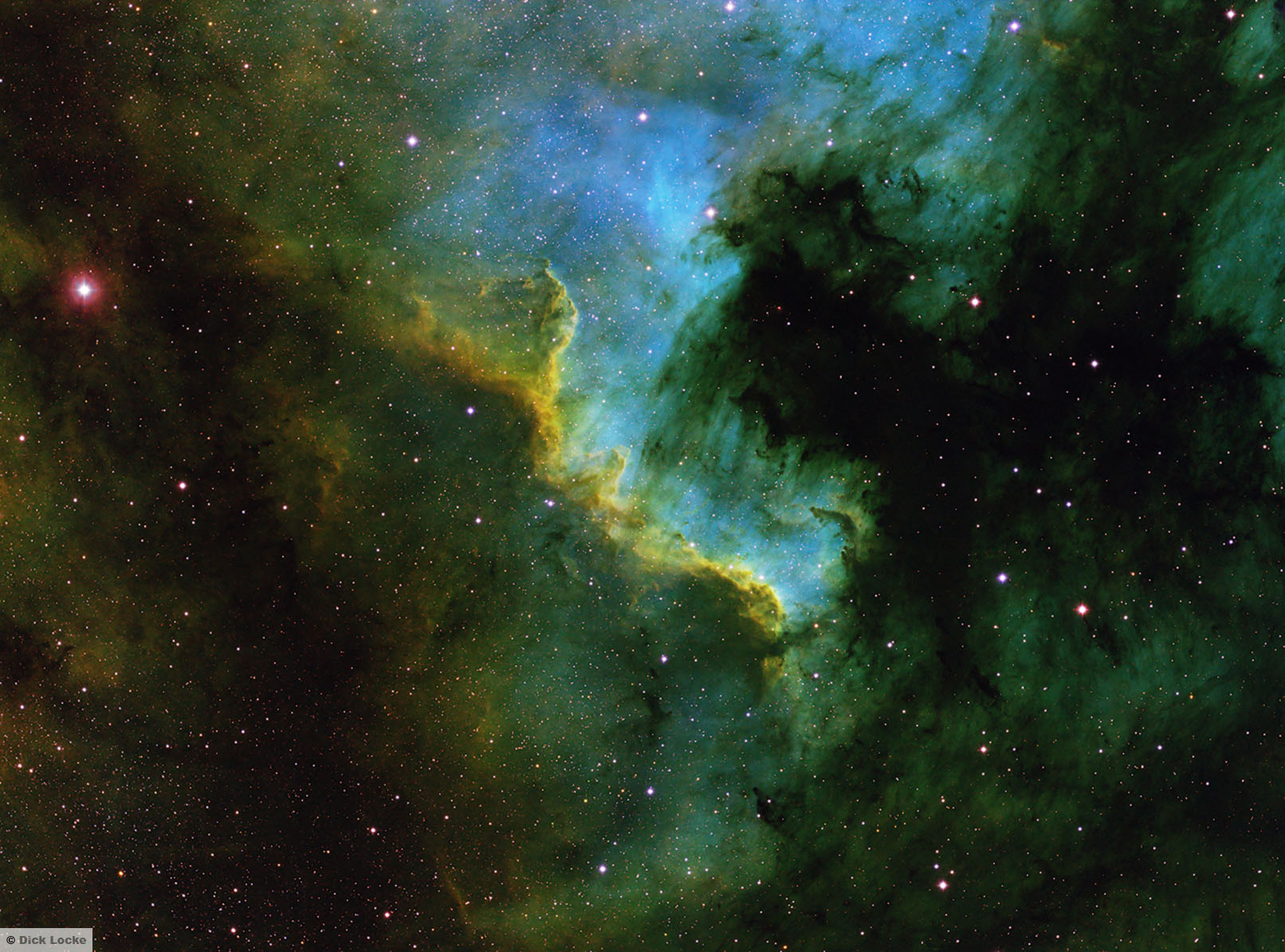 Central America and the Gulf of Mexico: Hubble Palette

This is a narrowband version of a section of the North American Nebula, NGC 7000, in Cygnus.  The featured area here is sometimes called "the wall" or the "Cygnus Wall."  The wall is very interesting in the scheme of things, but is often kind of overlooked given the spectacular neighborhood (NA & Pelican Nebulae.)  Details: SBIG ST-8300m monochrome camera and the Takahashi FSQ-85 telescope (no reducer).  Exposures are Sulfur (Red) at 33 * 5 min, Ha (Green) at 42 * 5 min, and O3 (Blue) at 40 * 5 min; total 9.6 hours.  My equipment rides on the AP 900GTO mount.  My processing techniques are discussed here.  This image is from the September 2015 Davis Mountains trip. 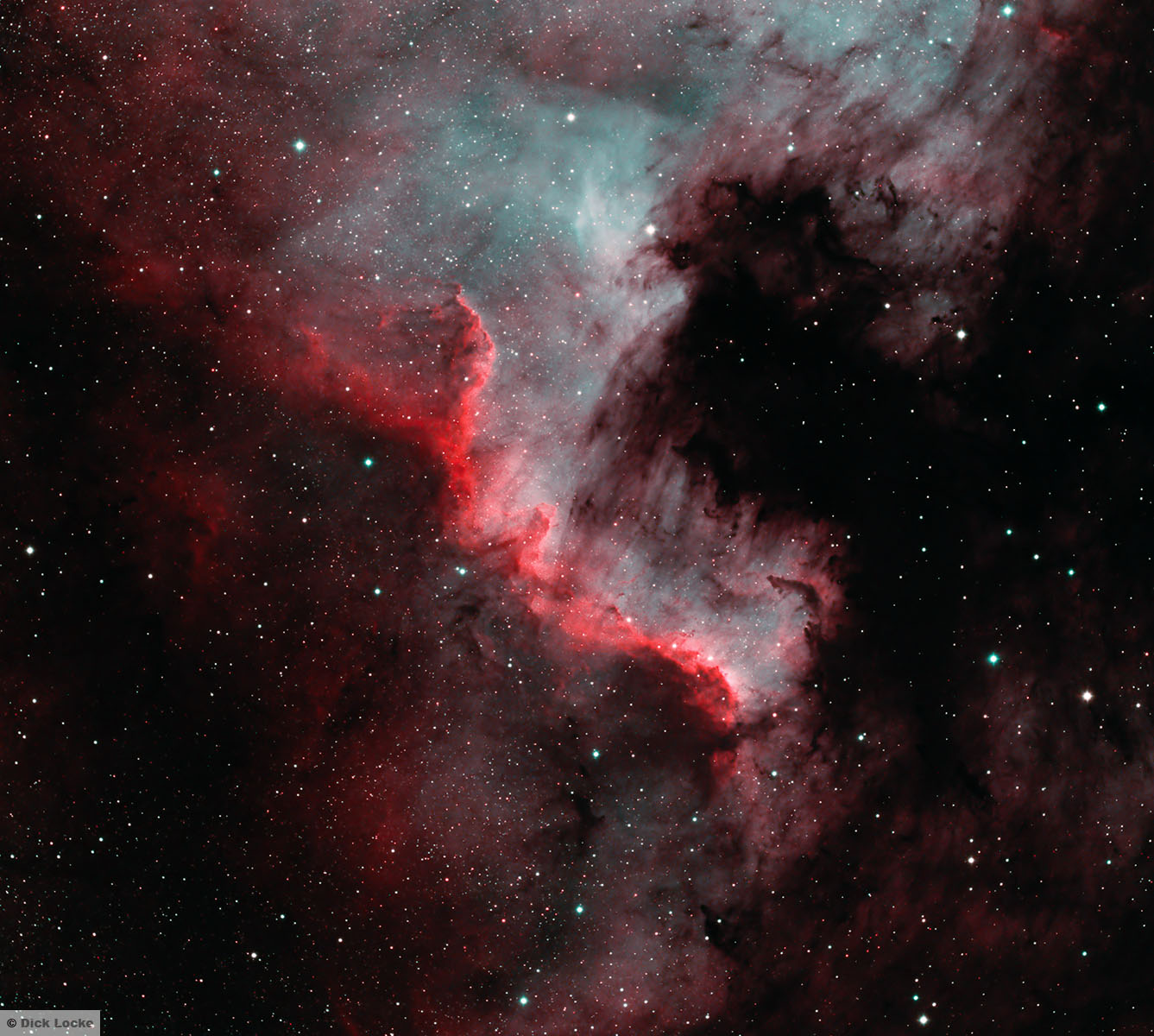 This image is composed of the same narrowband data as the Hubble palette images, but with different processing.  The starting point was the color formula mentioned on the bottom of my Narrowband Imaging page.  After that I adjusted things to taste, with perhaps the biggest change is that I blended in the bright H-alpha image into the luminance to help smooth things out.  A fair amount of noise reduction was needed in the dim areas due to the relatively weak signal in the Sulfur image, especially. 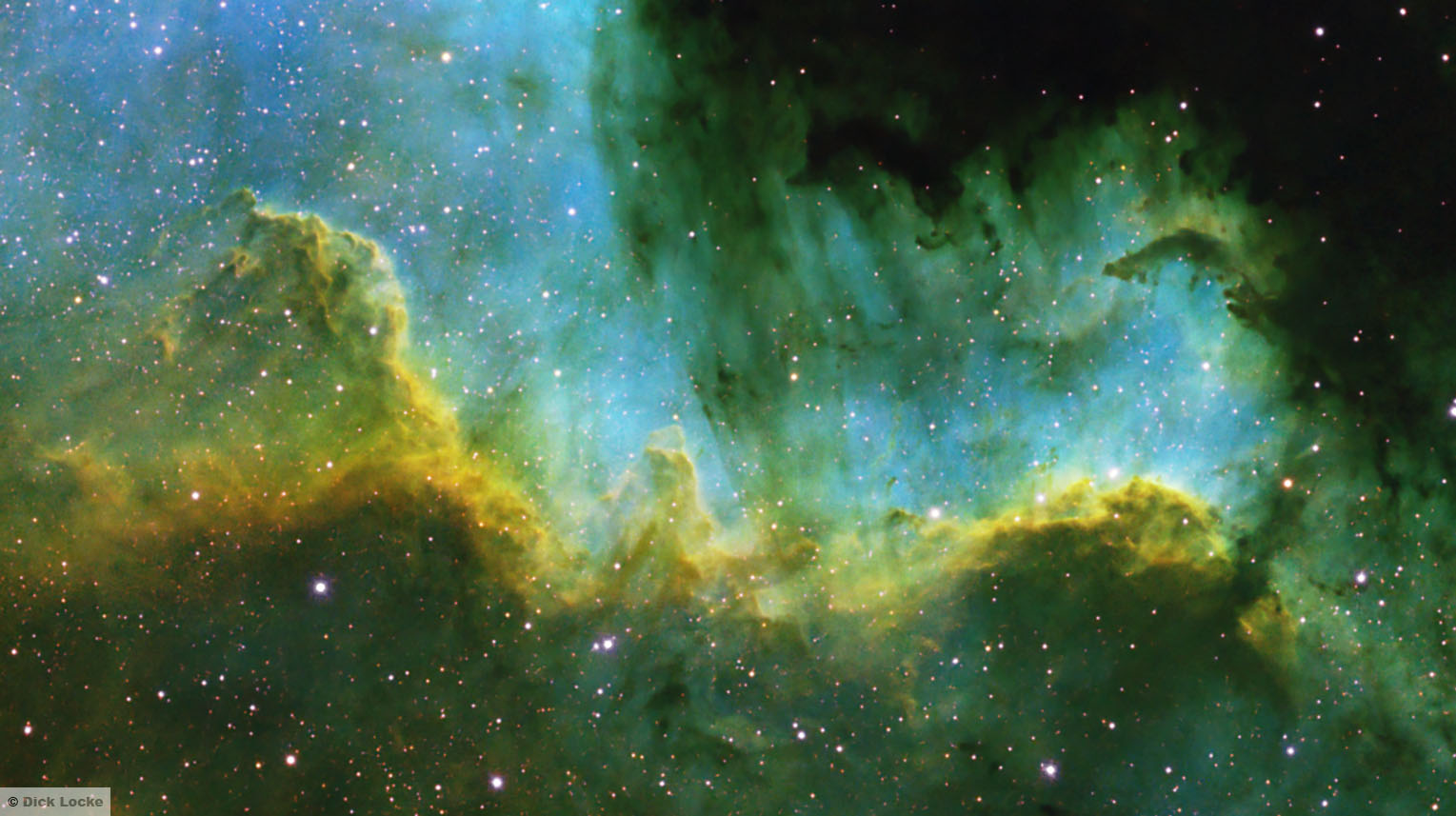 Same base image as above, cropped and tweaked to feature the wall area.  This is at the full resolution of the camera. 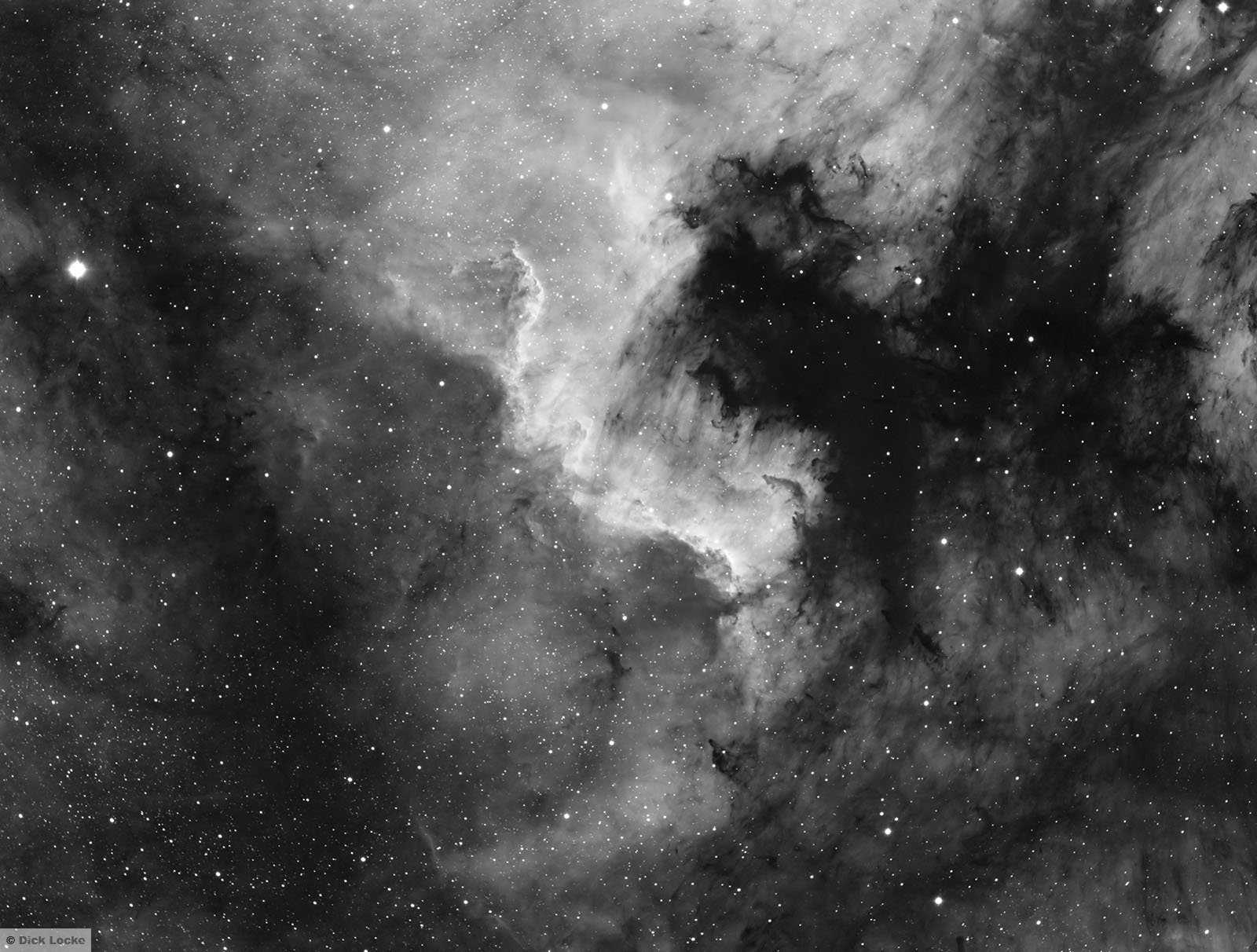 The Cygnus Wall in Hydrogen Alpha

Details: 42 * 5 minute exposures with the SBIG ST-8300m monochrome camera and the Takahashi FSQ-85 telescope (no reducer).  My equipment rides on the AP 900GTO mount.  My processing techniques are discussed here.  This image was processed to retain some detail in the brightest areas that were blown out on the first version I posted (on the September 2015 Davis Mountains trip page here.)

Check out my wider, 2011 narrowband image of the North American and Pelican Nebula areas here. 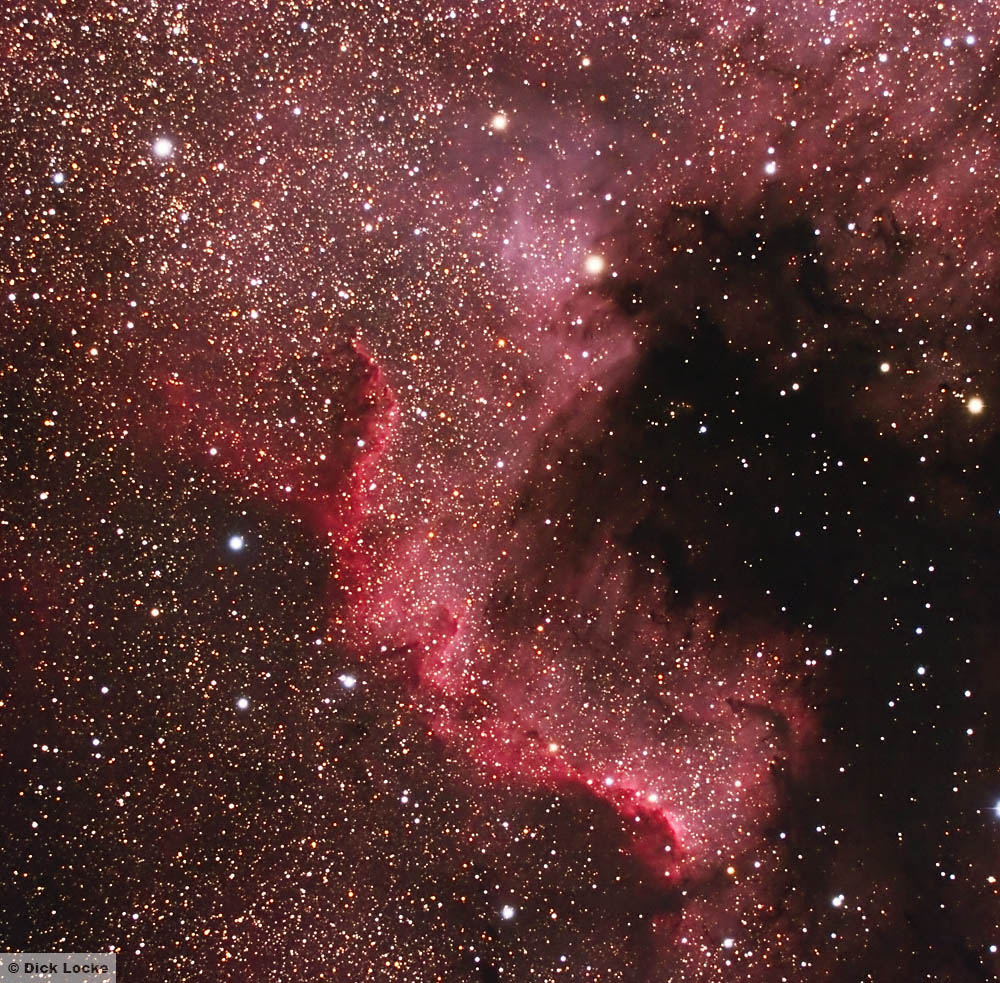 This is a section of the North American Nebula in Cygnus.  The area of interest is the Mexico and Central American rift area.

More Information from SEDS: "This nebula is lying 3 degrees from bright Deneb, Alpha Cygni. Some people claim it may be visible to the naked eye under good, dark conditions, and a preferred object for amateur astrophotographers. The distance to the North America Nebula is estimated at 1,600 light years. The North America Nebula was perhaps detected by William Herschel who cataloged a "faint, extremely large, diffuse nebulosity" near its place under his catalog number H V.37. John Herschel definitely found it and cataloged it as h 2096 and later as GC 4621. It was first photographed by Max Wolf on December 12, 1890. "

Processing Notes: I processed this image specifically to preserve detail in the "rift" area that is in the "Mexico/Central American" area of the North American Nebula.

Check out my wide, narrowband image of the North American and Pelican Nebula areas here.