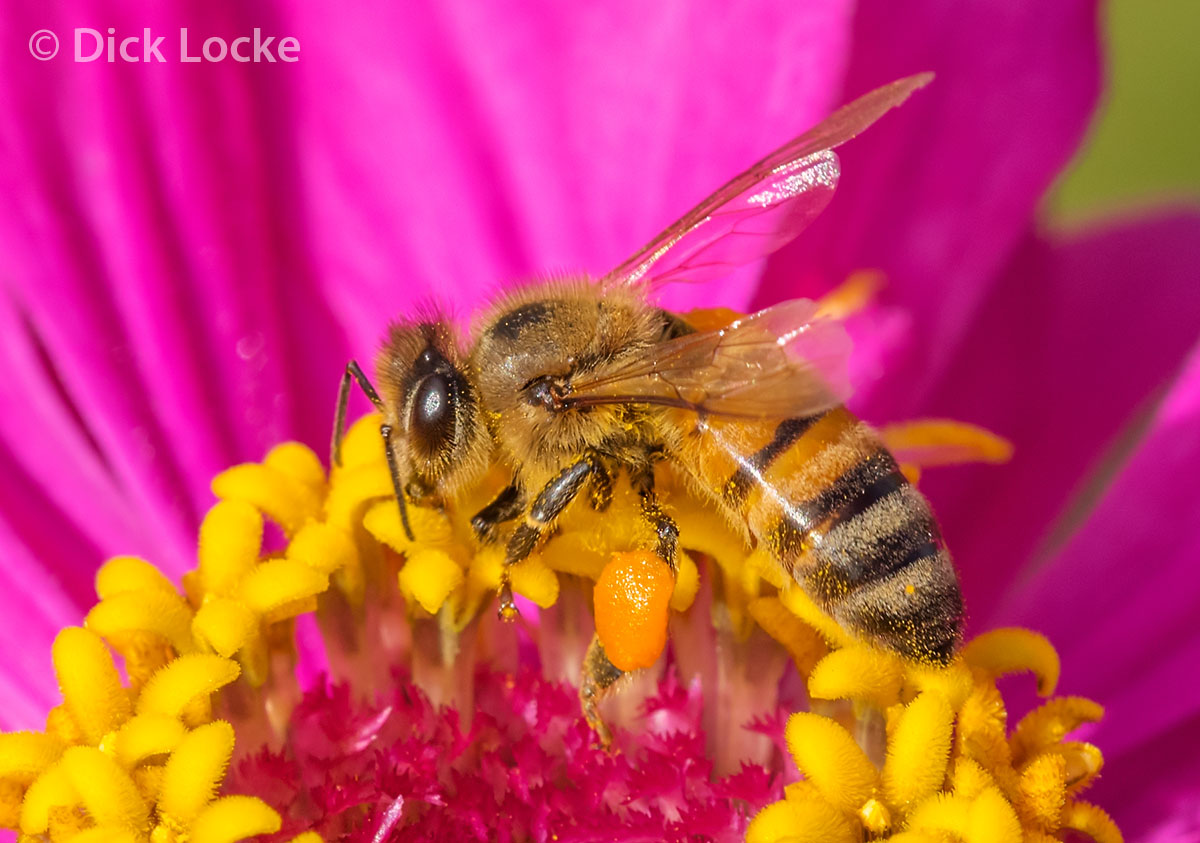 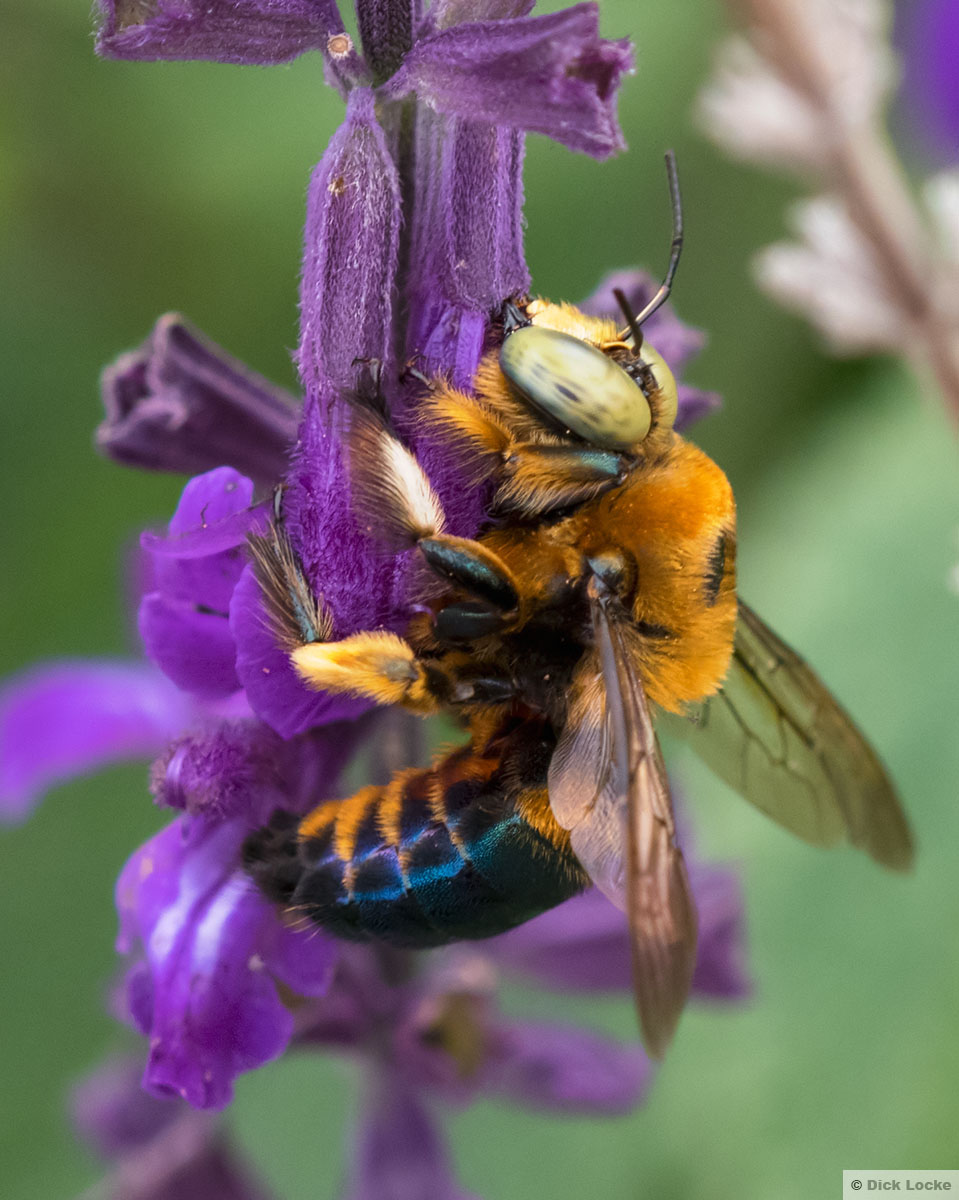 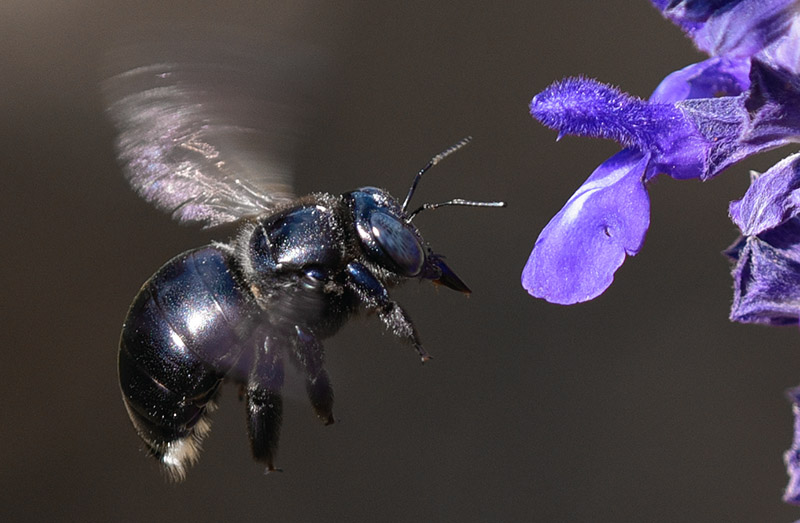 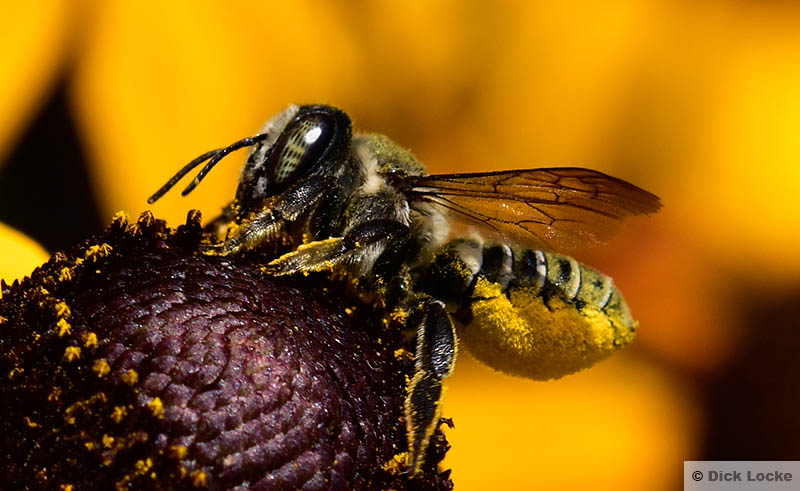 Once again, many thanks to Gil for details on this one:  This is indeed a bee from the family Megachilidae, which includes both leaf-cutter bees (which make their nests from parts of leaves) and mason bees (which make their nests from tiny pebbles). Megachilids are are unusual in that they carry pollen on the underside of their abdomen, not on their legs. [This] photograph shows this well. This is a large group of hundreds of species, so it would be beyond my ken to identify the bee in your photograph to species. However, your first photograph also shows the bee lifting its abdomen horizontally while collecting pollen, and that is a characteristic of the genus Megachile, called “large leaf-cutter bees”. My best guess is your subject is a Megachile species. 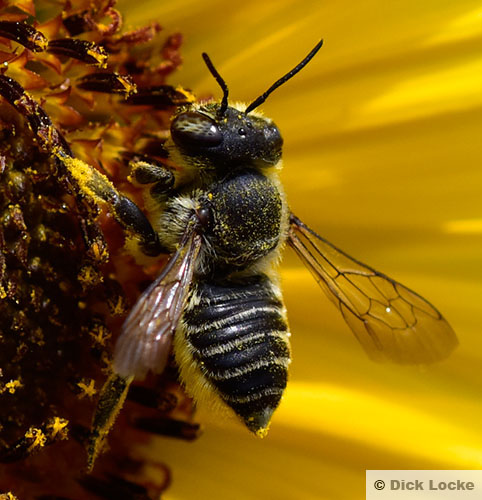 Above was from the Chihuahuan Desert Nature Center and Botanical Gardens outside of Fort Davis, TX.  Here's the bugguide link. 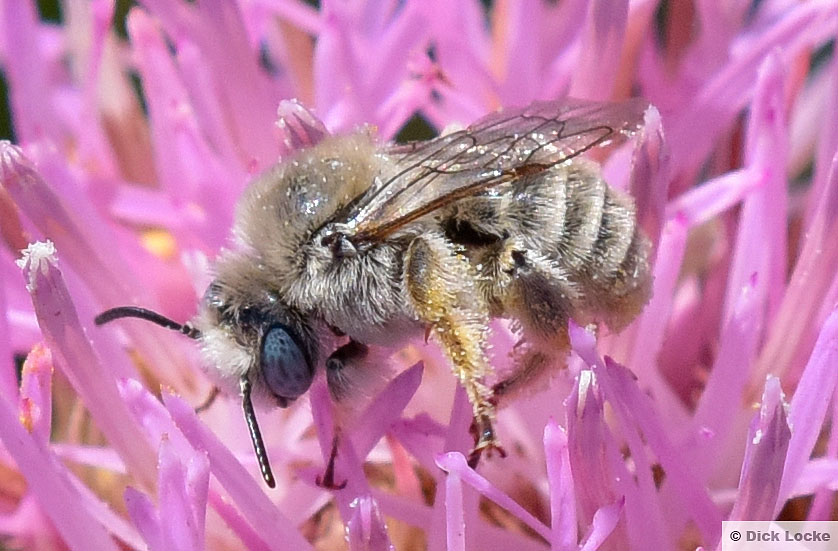 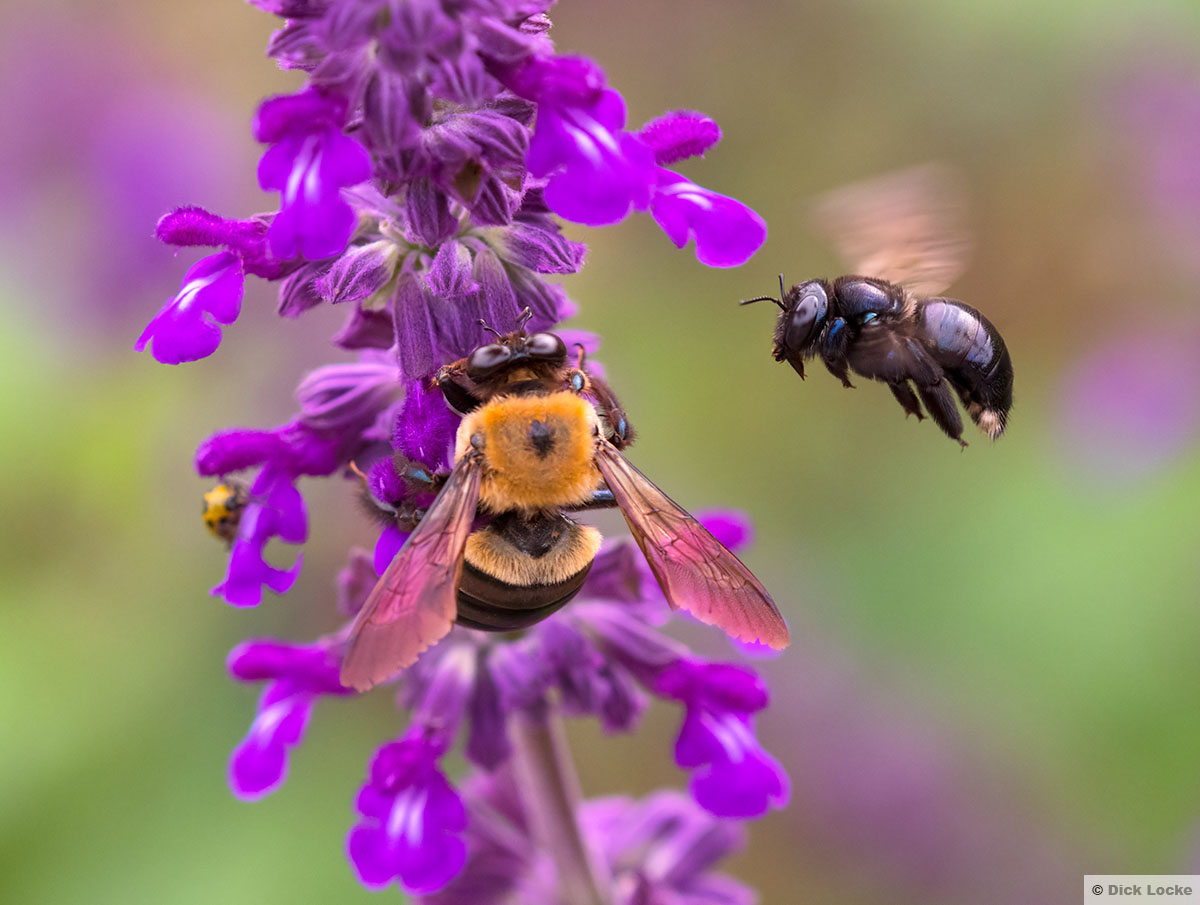 That's a male carpenter bee center left, and a female in flight on the right.  Cucumber beetle out of focus on the left ;-) 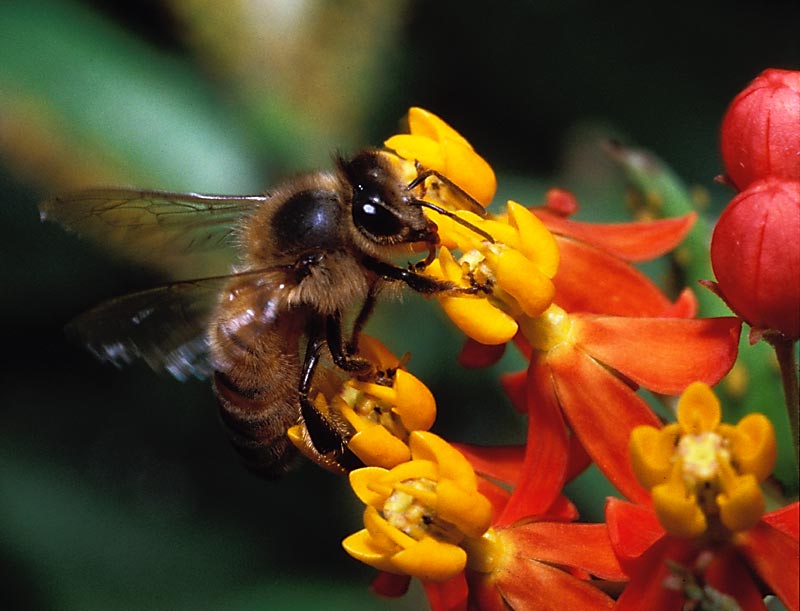 Golden Acres Honey is using the above image in their trade booth. 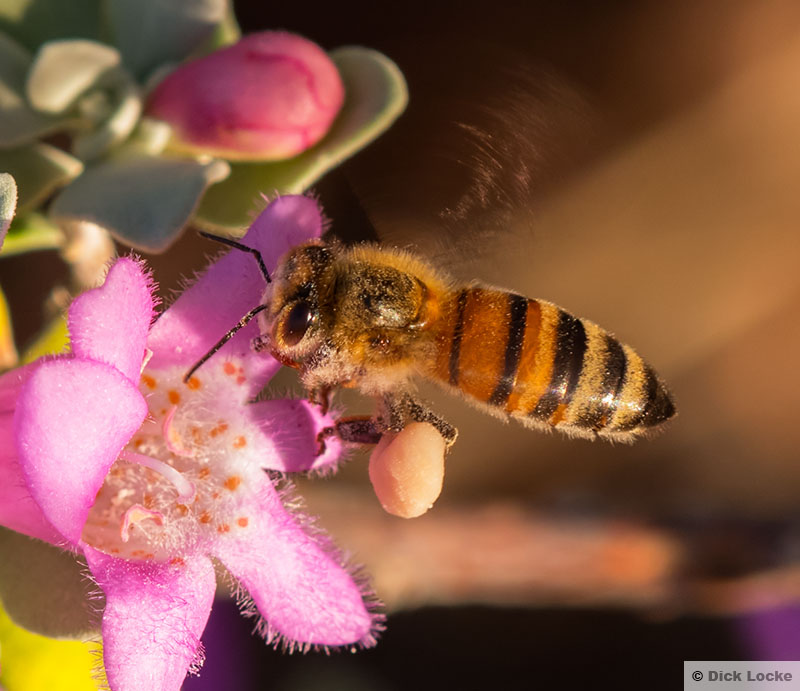 It was Macro Monday in the Davis Mountains; Phil and I took a long morning walk with our cameras on 9/7/15.  The day got off to a good start with this frame at 9:00 in the morning...  I guess it must have bee cloudy the night before if I was up so early ;-)

Cicada killer wasp pictures are now on my wasp page. 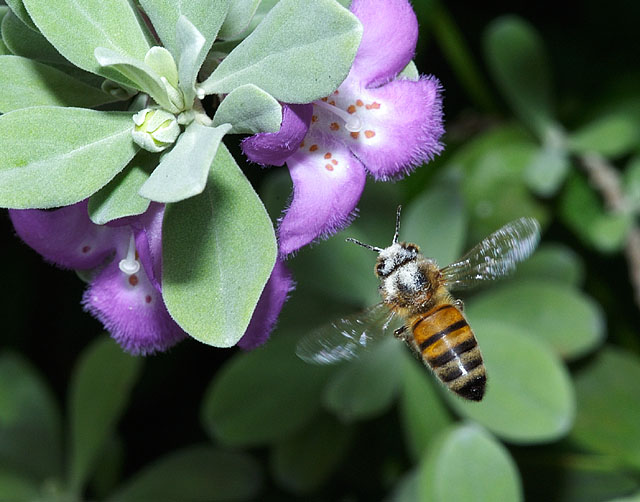 This is a very old shot... This bee was hovering, nearly stationary, in front of the purple flower (believed to be Purple Sage) for at least 45 seconds.  Not quite sure what it was up to.  Nikon D100 camera, Nikon 105 f2.8 Macro Lens at f22, Nikon SB-28 flash, Aperture priority, raw mode. 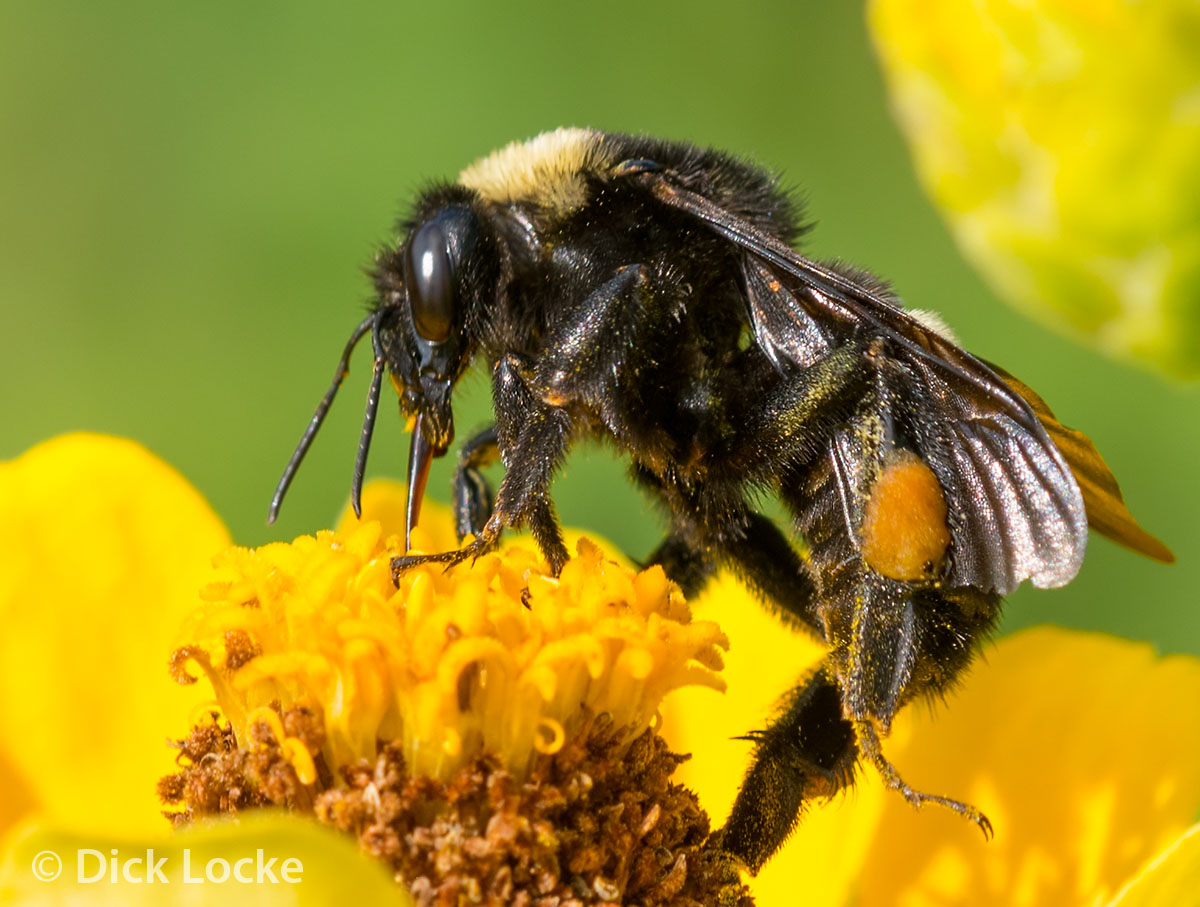 Below: Robber Bee and other bee pictures
This next bee is "robbing" nectar from the flower. Thanks to Conor Cahill (conorinthejungle@hotmail.com) and the entomology mailing list, this has been identified as a Carpenter Bee. See the end of this page for more info

Robber Bee info: Pollinators such as bees won't do it for nothing, so flowers provide a rather energy-expensive 'bribe'--the nectar. Obviously the flower doesn't 'want' to hand out nectar to insects that aren't good pollinators. In theory therefore they adapt to keep out the bad pollinators, and allow the good ones in. The good ones tend to be big hairy ones--they will catch the most pollen and spread it around. It's therefore quite common to see flowers with a long narrow trumpet shape--the nectaries (the bits that secrete the nectar) are way at the bottom of that. In order to get at the nectar the bee has to struggle down and stick it's long tongue down but is forced to rub pretty hard against the stamens. If you look down the trumpet of a flower like this you should see the stamens--the bits that produce the pollen--on the top side of the flower about half way down. In order to get to the nectar a large bee has to rub past this.  Among the various different species of bee there are those that have long tongues and those with short tongues. I can't pretend to be an expert on bees at all (I only ever worked on flies), but what you seem to have on your flower is a species of bee with a short tongue but strong mouthparts. Basically it's tongue is too short to get at the nectaries via the front door (I guess it would be regarded as a 'bad pollinator--maybe it isn't very hairy or whatever, I don't know). To get to the nectar therefore it bites through the petals and can lap up the nectar. Of course this is no use for the flower because the bee doesn't do any pollination for the flower.

This page features bee/wasp close-up (macro or micro, in photo lingo) shots.
Most of the old film images are from Kodak E-200 slide film, Nikon N90s hand held, Nikon 105mm macro lens, with flash, ~ f32. Flash can be helpful for fast-moving critters.  More recently, beginning with the Nikon D7000, cameras have better low-light performance and I seldom use flash for macro bug shots.